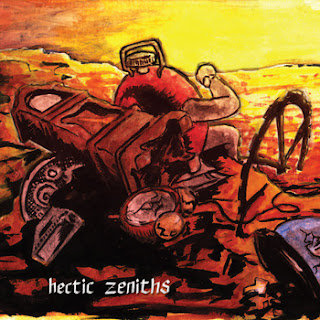 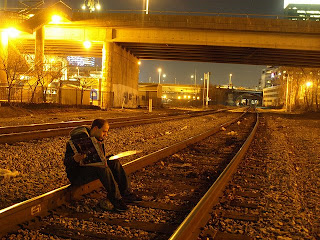 Hip-hop and rap are two genres that I find it incredibly hard to get into, for myself, though to say I'm not at least familiar with a couple of names wouldn't be incorrect. Personally, I find myself drawn to more atmospheric forms of electronic music, for the most part, which I guess is why I would say I'm more of a trip-hop fan. I won't go into all my various reasons for disliking what I've heard from hip-hop but I will say that while I may not like the style, I can certainly appreciate the work that goes into it. When I got this a while ago it did take me a little while to try and decide if I wanted to cover it or not because of its connection to hip-hop, which is a style I don't really want to pretend I have any knowledge of at all.
What ultimately made me decide to cover this album was the fact that when I listened to the album, while there are elements of hip-hop in it, there are also strong traces of trip-hop, downtempo, and ambient music as well. In addition to that, a lot of the tracks on here are quite short, with several acting more or less like an idea rather than an actual song. Unlike a lot of other records that I've felt use this tactic to just put together a handful of songs and add a couple of ideas as interludes, more or less, I did feel like even when the songs were short on here, they weren't bad or uninteresting and actually worked to the album's advantage, in my opinion anyway. The vocals are, thankfully, are sung, when they are sampled, which does bring to mind more of a trip-hop feel to the record. The use of piano and more orchestral arrangements does wonders for setting a mood as well.
One of the things I really feel conflicted about with this record is the atmosphere that surrounds it. I don't know if others will find this to be true but I thought that the whole vibe of the record was a bit unstable. The sound of most hip-hop is fairly warm, not a lot of it cold and mechanical but I felt that the orchestrations, or melodies rather, provided on here kind of shifted the tone into one that was conflicted between the warmth and punch of hip-hop band the darkness and sensuality that is found in trip-hop. I also found that the first couple of the tracks on the album did feel like they were out of place to me, and the opening sample on One That Got Away (Intro) is just a bad way to start off an album in my opinion. In all honesty, if you said I was just being nitpicky about it, I probably wouldn't say you're wrong, but it was something that did hurt some of these songs in my opinion.
I feel that Adam Morgan Prince is very talented and managed to pull off a rather difficult fusion of trip-hop and hip-hop, obviously with other influences as well, pretty well. As someone who prefers more abstract forms of electronic music, this isn't exactly brain contorting stuff, but it's certainly an album that could appeal to fans of more poppy electronic stuff as well as nerdy IDM fans like myself. I have my own qualms with the atmosphere of the album, but musically, I think it's a solid piece of work.
Overall Score: 7
Highlights: I Might Drown, Know My List, Zeitschtichen
Posted by maskofgojira at 9:55 AM