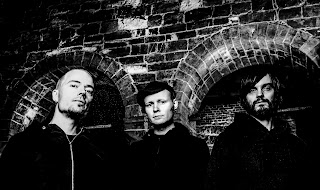 I, like most people who enjoy some good progressive oriented extreme metal, enjoy Extol. I remember I found out around the same time I was really getting into the genre and groups like Opeth and the like and just being blown away by albums like Undeceived and Synergy. Of course I found out about them after they had broken up so finding out that they reunited for a new album was just great.
Knowing that only three members have returned to form the Extol we now see before us is a bit disheartening knowing that it isn't a full-lineup but whatever, I should be thankful that they even brought the band back instead of complaining. Sonically, this album definitely shifts from the tone that it seemed as though the band was moving towards on The Blueprint Dives back in 2005. While the riffs certainly have flairs of technicality, this is far from the more progressive metal/rock approach taken on that album, which I'm sure pleases many a fan who disliked that album. As someone who liked that album to a degree, I can see why they shifted back towards a sound like the one they wound up with on here, which is to say a very modern sounding melodic death metal album. This is clean, the guitars are clean and thick sounding while the drums are nice and propulsive without sounding overly triggered, hell the bass can even be heard on here, it's a solid production job for sure if not a bit cleaner than I would have preferred. This isn't quite as "progressive" as the three full-lengths that have come before it, opting to take a more melodic approach towards songwriting.
I think that despite the praise being heaped upon this album, something has been forgotten along the way. In the time between The Blueprint Dives and this album's release, several of the band members who are not on this album and yet were in the band at one point created a group called Mantric. Now, I'm not saying that the album that band released back in 2010 had any impact on this album's creation, but it needs to be mentioned that none of the members involved with the band are on this album, which may explain the lack of more progressive elements. But let me make this clear, despite how much I've been talking about it, I have no problem with the direction the band have taken on this album, it's perfectly fine. If I had one complaint about it, it's the lyrics, which, in my opinion, feel a bit overtly religious for my own tastes. Songs like Open The Gates and Behold The Sun just come across as a bit "preachy" to me - in the clean vocals anyway. Strangely enough though, the album's title-track didn't bother me for some reason. This is something that obviously hasn't effected other people as much as it did me, so you can make of this information what you will.
In terms of songwriting, I guess it might disappoint some people to know that I found this album somewhat lackluster in that regard. It's not lacking too much, but there were a few songs that I just didn't really connect with in the way that I thought I should have. I mean, there are some really great songs on here, Ministers for example is a great piece of work that I think really stands up to the band's older work, but then there are other songs like the first single, the aforementioned Open The Gates, which I just found sort of lame and uninteresting. Honestly the greater portion of the record is great, but the best songs, for me, were found on the second half of the album.
So, overall, I was only slightly disappointed by this album, but even then I still dug the majority of it. More than likely it will bring in a whole bunch of new fans to the band who listen to modern metal (the production job on here screams that sound) but should more than likely still appeal to fans of their older material. Give it a shot if you're a fan or not, it's solid and deserves your ears.
Overall Score: 8
Highlights: A Gift Beyond Human Reach, Ministers, Unveiling The Obscure
Posted by maskofgojira at 12:08 PM