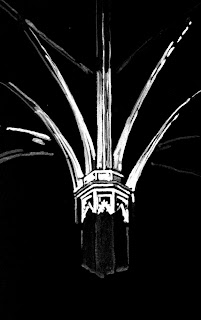 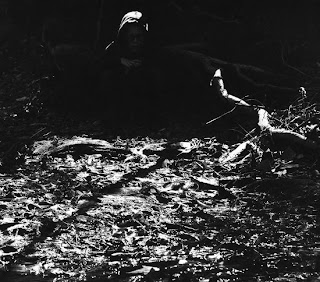 Okios is a project I wasn't really sure what to expect from when I got the promo for it a couple of months ago. Simply knowing that it was being released by Land of Decay and featured André Foisy himself on a track was enough to get my attention for sure, but I was still trepidatious. It was only after listening that I realized that there was no reason for that hesitation.
I've made it pretty clean (I'm assuming) in the past that I'm not a really huge fan of industrial based music, or at least in the sense of the really extreme and underground stuff. Once in a while I'll get really impressed with what an album and/or project is doing and that's great, but I'm always somewhat cautious about these sorts of albums because just as often as I find a project that's really interesting and cool, I'll find an album that's quite bland and really quite boring. Granted, Land of Decay doesn't put out "industrial" records in the same way that some other labels do and tend to focus more on the experimental side of drone (if I'm trying to stereotype them that is) and that's more where this project's focus appears to lie. In that regard, I'm actually happy, simply because for one reason or another drone is something I can get into, industrial, in some respects, is not. Not to say that there aren't some harsher tones on here that could fit on some of the more warped ideas that I find from those underground projects (just to be clear, I'm talking more about projects like Steel Hook Prosthesis rather than Nine Inch Nails - for those that might get the two confused when I say industrial), but they never breach outside of more steady pace that the drones create. You don't get the harsh clangs and effect-laden vocals, but rather occasional effected "beat", and I use that word lightly in the case of this album, or the tone of the feedback, but that's very nit-picky things. The best example of this release even going for that sort of a sound would be on the shortest piece on here, Solve, which I would say definitely takes at least a bit of an influence from glitch based music. But then there's a track like the closer, Vimana, which appear to take a bit from shoegaze and/or ambient music, contrasting the harsher and more abstract tones heard on the track that came before it with more of a lush sounding soundscape. Omniscence, the track featuring André Foisy actually sounds closer to his work in Eolomea than what he's done in either Locrian or Kwaidan; and that's pretty much the closest sonic comparison I could actually make for this entire release, though it honestly doesn't strive for the intensity that Eolomea does.
So yeah, it's a solid little album, not sure why there's a radio edit of a track on here though, but aside from that it's a very solid slab of drone. It's pretty confident in the choices that it takes on here, whether it's though various subtle effects or Foisy's contribution, it feels very well thought out and well planned. It's a nice little diamond in the rough for all those people who are looking for a new drone project to keep an eye on.
Overall Score: 8
Highlights: Omniscence, Vimana
Posted by maskofgojira at 2:24 PM