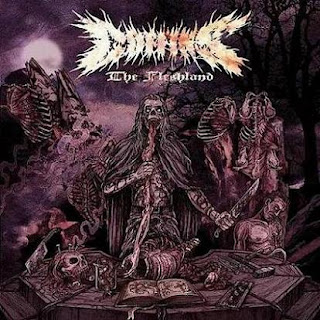 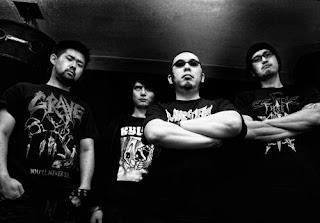 When it comes to the death/doom genre, very few bands are as prolific as Coffins. I remember first finding out that they were from Japan and being shocked because they didn't give off any indication, sonically, that they were from the far east. I've been a casual listener throughout the years but I was certainly interested in what sort of album they would do for Relapse.
It's worth saying up front that while I am a casual fan of the band, I wouldn't exactly say I'm a huge fan. I certainly like what they do and they are incredibly prolific in what they do, but like so many other bands who have many, many releases, songs, and entire albums, can be hit and miss. I listened back to the band's 2008 album Buried Death to prepare for this review, and was actually surprised by how many good songs there were on that album, despite the really awful kick drum tone. So I came into this hoping to be impressed yet again, and in a way I was both surprised and disappointed. I was surprised because of how uptempo several of these songs are, which is nothing new for the band, they've done more traditional death metal songs along with their doomy ones, but this album opened up with several of them, which hit me in a way I didn't expect. Even several of the slower paced tracks, The Colossal Hole for example, don't feel quite as downbeat as they have on previous records. The entire record actually is a lot more evenly mixed as well. It doesn't have that really crushing sounding guitar tone or thumping drum sound, the entire thing is a lot more evenly distributed. In a sense, more palatable.
The disappointment came in that after this album had finished, almost nothing stayed with me. While a song was playing I could be just fine, but I wouldn't be able to tell you anything about it other than if it was a death metal song or more of a doom metal one (fast or slow basically). I've got nothing against this album or band, but this album just didn't do anything for me. It was just one of those records I would put on and whenever I was meant to be listening to it, my mind would deviate and wander towards other things, which isn't exactly the desired effect for a record of this sort. There are some noteworthy things that happen in a couple of songs, but the vast majority of what's on here just isn't really anything you either haven't already heard before or done better, both by this band. The band has made slower songs more crushing and heavy and made their death metal songs faster, more crusty, and catchy in the past. This had it's moments but was by and large forgettable. With the exception of closer Tormentopia, the rest of the album is also devoid of anything "quirky", and I do use that word lightly. It's not as though one should ever come into a Coffins record expecting that, but for them, this song did stand out as being a more fun.
In the end I guess the best way to describe my feeling towards the album was indifference. It wasn't good but it certainly wasn't bad, it was just sort of bland and unmemorable. If you're already a fan or if you dig death/doom give it a chance but I got nothing out of this. I would recommend their last full-length over this one.
Overall Score: 6
Highlights: Hellbringer, Dishuman, Tormentopia
Posted by maskofgojira at 11:33 AM