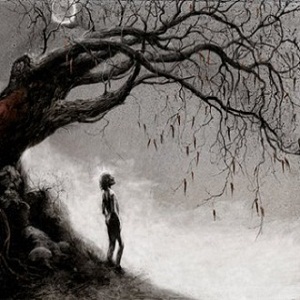 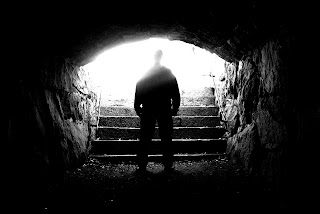 I've been following October Falls for several years now, it I remember correctly, they were actually one of the first "underground(?)" black metal groups I first got into. Having compared them to Opeth early on, the project immediately appealed to me. It's taken me quite a while to get to this album, but better now than never I guess.
For all of that I began to feel the "gimmick" ran a bit thin after 2010's A Collapse of Faith where the entire album was made up of extended tracks that really act as a whole (one) track. That's not a gripe against either of the albums that M. Lehto did like that, but I felt like after two full-lengths like that, I wanted to see him get back to writing songs that were a bit more stand-alone. Luckily that's exactly what this album is. Featuring nine stand alone pieces that perfectly channel that melancholic atmosphere the band has developed and making it work within shorter song lengths. Besides that simple adjustment, I think that the songs are generally more accessible melodically as well, as the influences from and comparisons to melodic death metal can be heard throughout the album. In the past, I have found that the aspect I connected with the most from this band was it's melancholic atmosphere, no surprise that they site Katatonia as an influence, but rarely have I felt so invigorated by their melodies as I did when listening to tracks like The Verge of Oblivion or The Weight of The Fallen, which were surprisingly up-beat and driving songs.
I also have to say that the production on here is rather well constructed as well. I can't say offhand that I remember the bass coming through as clearly on the band's last full-length, but on here, it has quite a bit of crunch. You can just hear it punch through the guitar tones and while that may not matter to some, I've always admired a band that isn't afraid to put their bass in the mix of an album, and it certainly gave me even more enjoyment while listening to this. In conjunction with the huge sounding drum tone on the record, you get a rhythm section that really pumps. I hate to say that the guitars don't have the same sort of vibe, but then again, they probably weren't meant to. The tone is a bit less crunchy and is much more modestly distorted. It's not massively heavy or anything like that, so it's perfectly clear that making an all around intense sounding guitar tone wasn't on the band's mind but rather one that is clear enough to allow the melody to be heard it the best way. Finally there's the vocals, which are all fine and good for the most part but really come alive once Tomi Joutsen (of Amorphis) comes into the picture. While Lehto's screams are perfectly fine, Joutsen's resonant cleans just soar over the songs he's on. His work on Boiling Heart of The North is one of the most soulful tracks I've ever heard him on. His cleans actually are a nice contrast to Lehto's more intense screams.
So yeah, overall this was a nice solid album, definitely a nice change of pace from the typical style the last two full-lengths have been in my opinion. This is a lot easier to digest and grasp as well, with more immediate songs and solid songwriting. Definitely a nice treat if you're in the market for some more melodic black or death metal.
Overall Score: 8
Highlights: The Verge of Oblivion, The Plague of A Coming Age, Boiling Heart of The North
Posted by maskofgojira at 11:46 AM