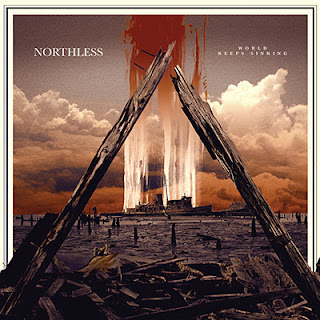 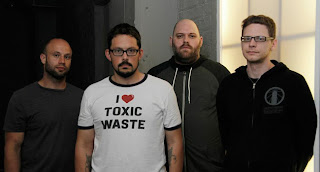 I've been following Northless for a couple years at this point and have yet to be disappointed with their brand of sludgy post-metal. While it was never the most unique sounding on the block, in terms of just utilizing their sound to various extremes and sonic weight, they were certainly one of the few able to achieve that. Their split with Light Bearer last year was one of my favorite splits of the year and hearing them follow up was definitely enticing.
Up until this point in their career, in my mind Northless has always been a sludge metal band. Yes, they've flirted with doom and post-metal, but at their heart they were a sludge metal band. They were also heavy as all hell, with absolutely weighty and bass rumbling guitar tones, but on this album the completely blew me away. Sludge metal bands, post-metal bands, and to a certain extent doom metal bands, have never been the most adventurous genres. They're slow and heavy, for the most part, and they like it that way, but with this album Northless has really taken a big step forward by choosing to expand their sound and play with some other genres as well. Whether it's through the use of black metal or math rock or prog-rock the band hit each genre inclusion with confidence and the skill one wouldn't expect from a band within this genre. But make no mistake, just because the band are playing around with some new ideas doesn't mean that older fans should be weary of what's on here. The band still keep things heavy and crushing, only now it's more exciting.
There's also no denying how strangely catchy this album is. As someone who's a fan of angular and dissonant sounding riffs, this album really hit a sweet spot with me. It was channeling all those bands that I love (Deathspell Omega, Gorguts, Blut Aus Nord, Ulcerate), whether intentional or not, and doing something a bit different by melding similar ideas with their own previously established sound. The title-track really got me, with that simplistic but extremely piercing main riff, I found it impossible to not put that song on repeat. Though to be fair, merely comparing the band to those would do a discredit to what they're doing on here, it's simply a frame of reference thing. For as much dissonance and chaos as there is on this record, there is also melody and beauty, a call back to more of the band's post-rock/metal traits exhibited in the past. A song like Passage perfectly encapsulates that more tranquil sense of beauty while still bringing the heavy when the song climaxes. Yes it's a genre trope that we're all familiar with at this point but when I'll keep bringing it up as long as bands like Northless keep doing it well. But it's worth noting that for as much beauty can be heard in the album's two longest tracks, Communion and Passage, the rest of the album keeps things nice and aggressive and tense. I'm serious when I say that some of these riffs are irresistible (at least to me) because they balance heavy with dissonant so well.
As much as I dug what the band was doing before, I certainly did not expect an album of this caliber to come from them, which resulted in my mind being blown. I can't see this record not being somewhere in my top albums of the year in a few months. This is such a good and well crafted piece of work, so do yourself a favor and check this one out as soon as you can.
Overall Score: 9
Highlights: World Keeps Sinking, Passage, Wither and Escape
Posted by maskofgojira at 11:41 AM