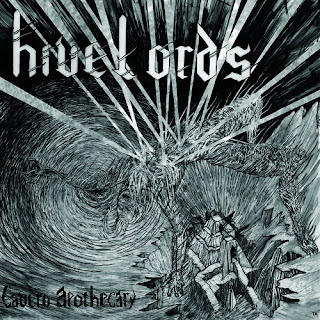 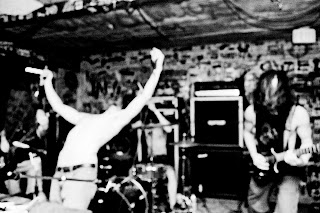 I wasn't familiar with Hivelords before deciding to give this album a listen. Blackened sludge/doom is a genre that I actually enjoy quite a bit, though when I finally decided to listen to this album I didn't know what genre it was. I simply had a block of time and this album stuck out from my list (so as you can imagine, the process for deciding what to cover is fairly strenuous).
Starting with a riff as unsludgy as the one that opens up Atavus Lich on here immediately threw up some signs that this would have more going for it than the typical blackened sludge metal band would. I mean, yes, stylistically, I don't think I could call this anything but what it has already been called, in terms of sub-genre categories, but I would argue that these guys are doing a bit more to stick out from the average band doing this style. For one, while it has plenty of slower moments that are heavy and all that stuff as well as your faster black metal ones with scowled vocals and tremolo picked guitars, there's a bit more on here that just puts it over the top. Maybe it's the riff choices and how they do occasionally pick some parts that sound a bit less expected and the vocalist does feel a bit more wild and more free in his style than the average one from many bands. He explores clean vocals that actually have more range than one might expect throughout the album, at times channeling ideas that reminded me of Bruce Lamont while at other times sounding like someone who might fit over pageninetynine or something. It's an interesting style that he brings to the table.
For myself, this was more of a visceral sort of album. There were spots that were memorable no doubt, a track like the slow and plodding Antennae Manifest for example, but whenever I listened to this it never struck me in that way that another record of this sort might. Songs weren't particularly riff driven, or at least it didn't feel that way to me, and appeared to focus more on atmosphere. Every song on here is drenched in a cavernous reverb that makes the whole thing feel dank and dreary. But when I listened to this, even for how slow some of the songs are, they had a very authentic visceral quality to them. With other bands in this genre they usually have a good riff or something going for them, but this band was able to do more and write songs that channeled a gut reaction from me, which isn't something I can ever remember having from a band of this sort. So, if all that made no sense, what I'm trying to say is that despite being able to write solid riffs, what stayed with me more was how naturalistic and authentic the band's performances were.
But yeah, I dug this album... actually a lot more than I expected to given the style of music that the band play. It's made me curious to listen to the band's previous two EPs to see if they have the same power that this full-length had. But on the strength of this album alone, I'd certainly be willing to bet that this is a band who will go on to produce even more interesting work in the future.
Overall Score: 8
Highlights: Antennae Manifest, Cavern Apothecary
Posted by maskofgojira at 6:18 PM