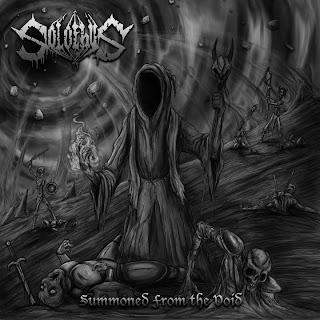 A few years back I covered the very impressive debut demo from Solothus, which obviously I really dug. It was only recently that I was sent an email by the band where they informed me that they were finally releasing a full-length so of course I was gonna cover it as soon as I could. I've been anxiously awaiting the right time to listen to this/review it ever since I got it.
I've been writing a lot of reviews for doom based albums recently so I think it says something when an album still manages to keep my attention and stay with me after listening to so many other records in relatively the same style. What kept me so interested in the band's demo was that they were playing doom/death in that 90s way where it was more about blending death metal and doom metal and achieving an atmosphere where bands were able to utilize both styles without keyboards. The band didn't have to commit to simply playing in a single speed, they could have faster tracks as well as slower ones, but they were able to craft this dank and bleak atmosphere that somehow neither genre achieved on its own. The early records from My Dying Bride, Katatonia, Paradise Lost, and Anathema come to mind for me, and while those influences were plain as day on the demo, they are less obvious on here. Though the fact that I even bring them up here will undoubtedly keep them in readers heads if and when they listen to this album, but honestly this is better than most of the material the above bands have put out recently.
The band's demo also showcased a style of songwriting that I think allowed them to create songs beyond their years and several leagues above their contemporaries. What I mean by that is that their songwriting on the demo was stylish and yet primal at the same time. They were heavy and atmospheric without conforming to the whole "cavecore" subgenre of bands that were either just blatantly ripping off Incantation and Immolation or just playing death/doom or blackened death metal with loads of reverb on their instruments. There were riffs in here, perhaps because the band take just as much from groups (outside of their genre of choice as well) that their riffs vary from hauntingly slow to strangely technical as well as perfectly melodic. Their songwriting chops are leagues above what I've heard many other bands in their genre doing, and that's not even limiting it to just this year, I'm saying these songs are superior to what many bands have been putting out in the last several years, if not in the last decade or so. Obviously this is just my opinion, but hell, I can't think of the last time another band from this genre was able to write riffs that stuck with me beyond the length of their own albums. But like I said above, the band don't just do the slow and plodding doom chords but actually throw in a few tasty chug patterns and some nice atmospheric chords progressions as well, just listen to the title-track for an example, among other things.
This is a group who have talent and, whether or not they know it, are probably one of the best bands doing this genre today. For myself anyway, it's quite hard for doom metal to get much better than this because it's got just about everything one could want from a band in this genre. It's stylish without putting style before songwriting; and while I wish the vocals were perhaps a bit more varied (if I had one complaint it would be that), I really don't have much more to say about this other than you need to check it out.
Overall Score: 9
Highlights: Plaguewing, Magus of Doom
Posted by maskofgojira at 5:02 PM