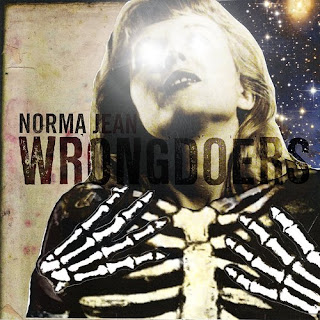 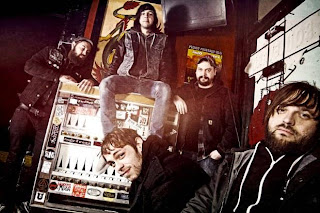 I obviously don't cover a whole lot of metalcore on this site (regardless of what you think of the djent genre), which should give you an indication of my feelings towards the genre. While I don't have a problem with it, I have grown rather tired of all it's repetition in ideas and bands and style, so very few bands manage to keep my attention. Norma Jean is a band that I've been following ever since high school (or maybe just before) and are one of the few bands from that time that don't make me cringe when I listen back to them.
Since released Redeemer in 2006 I've felt the band has been on a bit of downward slide. While The Anti Mother from 2008 had it's moments and showcased a more experimental and melodic side to the band's sound, it ultimately didn't do much for me. Meridional was released in 2010 and showed a bit of a return to form to a more chaotic sound that I originally fell in love with from them, but it wound up feeling a bit half-hearted to me, the album was split between shorter chaotic hardcore songs and more melodic songs that seemed like the band was more interested in. I was sure the band would just keep going in a more melodic direction, which would have been fine, but it wouldn't keep me as interested. That's pretty much what I was expecting when I first pressed play on this album for the first time. Sure, I had heard the single If You Got It At Five, You Got It At Fifty, but releasing one intense track doesn't mean the entire album is going to be that way. I figured it was the album's intense track and that the rest of it, or at least the majority of it, would be more melodic songs. Damn if I wasn't surprised when the album began to unfold before me.
Yes, this isn't as chaotic as the band once was, it's clean and more polished sounding. It's heavier as well - but that's something that's happened simply due to the production. But song wise, this album was much more aggressive and driving than I had any right to expect from the band. While the band's last record had it's fare share of songs that were hardcore, they balanced it out with more melodic songs, on here, it feels more like they blended the two together. Yes, you have tracks that still exhibit one in favor of another, whether it's the more grinding tone of The Lash Whistled Like A Singing Wind or the extremely catchy melodies of the Sword In Mouth, Fire Eyes, but most of the other tracks feature a fusion of the two ideas. It's the best fusion of the ideas I've heard a metalcore group do in a long time simply because it isn't the typical screamed/yelled verses and then sung choruses. Sure the band apply that brand of songwriting, but they also keep things varied. In addition to that, this band does two things on here that really appeal to me. While I don't usually expect it in metalcore, this band's first couple of records featured such a raw and live sound that feedback just roared through their songs, and that's something that just roars throughout several of these tracks. In addition to that, vocalist Cory Brandon just gets on my good side because he is one of the few vocalists within this genre who can emote any sort of passion or emotion in general when he's behind the mic, and boy does that come through on here. Two bonus points added on for those two simple things, because I they're that important to a record like this one in my opinion.
Along with all that, the band also manage to channel, whether intentionally or otherwise, a bit of an experimental flair on here. Several tracks on here channel quite a bit of stoner rock into their riffs, adding a nice swagger to the songs in question. It's been a while that's I've heard a band outside of the straight ahead hardcore or stoner rock/metal genre generate swagger, and I am damn pleased that a band like this one was able to use it well. There's also a bit of a post-metal-esque vibe on closer Sun Dies, Blood Moon. I'd go so far as to say as it's the most ambitious piece of music the band has written to date.
So yeah, I never expected to like another metalcore release this much again, but hot damn if this isn't a great record. It's everything I think metalcore was meant to sound like and it's been a while since I've heard a record that I thought could channel what those original feelings were. Hopefully if you're a fan of hardcore, metalcore, modern metal, stoner/sludge, perhaps post-metal(?), and really just a slew of other stuff, please check this one out.
Overall Score: 9
Highlights: The Potter Has No Hands, Sword In Mouth, Fire Eyes, Sun Dies, Blood Moon
Posted by maskofgojira at 6:37 PM