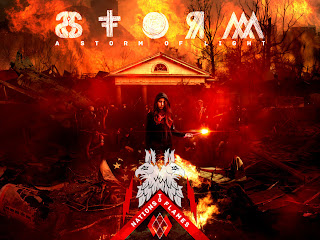 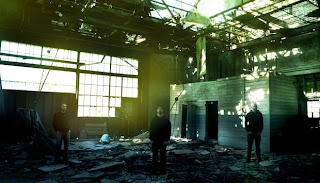 From my perspective, A Storm of Light has been a somewhat misunderstood and/or overlooked band since their inception. I recall the first time I ever heard of the band was through a review where they were, more or less, called a Neurosis rip-off group (isn't like there aren't dozens of those out there already). But recently, their 2011 album As The Valley of Death Becomes Us, Our Silver Memories Fade really blew me away and wound up being in my top albums of the year so when I first heard about this new album, I was very excited to hear what they'd do next.
I remember on my first listen through this album that when I got to track four, Omen a question arose in my mind, "When did ASoL start wanting to become Mastodon?" And that's a question that continued to pop up in my mind throughout the album, during various listens through it. I mean seriously, this sounds a lot like Blood Mountain musically and Crack The Skye vocally, it's like what the hell. I mean it's not like this band was the most progressive or unique band to emerge from the "post-metal" realm, but I dug what they did on their first two full-lengths and thought they really came into their own on the aforementioned third album above. They took the post-metal sounds from their first two records but infused it with more of a grunge and traditional heavy metal sense of songwriting style. Riffs and vocal melodies were more catchy and memorable than ever before. I continue to think that that was a very underrated album from that year. So I'm curious if I missed some sort of transitional release between that album and this one and where this shift occurred.
The riffs on here are obviously simplified since the band have become a three piece, but a hell of alot of the grooves on here sound like they were taken straight out of a Blood Mountain and Leviathan guitar tab book. It also sounds as if Josh Graham is doing his best Troy Sanders impression as well. He has almost the exact same tonality in his voice and appears to be using the exact same vocal effects on it as well. For a large majority of my first listen through I honestly thought that maybe Sanders was guesting on here as a vocalist or something. After a while it did just start to grate on my nerves because it's like, I already like Mastodon, both their old and new material, so why do I need a good band trying to do a poor job imitating them. I say poor not because the songs on here are inherently bad or the production is bad but it seriously sounds so much like that band that it just seems so pointless. There are plenty of bands who rip each other off, which is fine because I don't have to listen to those bands, I know they're hacks and chances are a lot of those bands are just starting out (some aren't) so they may find their feet eventually. But here, I honestly thought ASoL had found a sound that was unique and interesting on their last album and on here is sounds like they just wanted to stop being that band and wanted to cross over and be the band Mastodon stopped being due to a record like The Hunter.
In addition to all that the songwriting on here isn't even half of what it was on previous records. The band stipped things back, making the riffs simpler and groovier, making the songs more simplistic and shorter, but the end result just sounded uninspired, at least to me. Coping another band's style may have just been a gut reaction to not coming up with anything interesting enough on their own, I don't know. I said above that the songs on here were not "inherently band" and what I mean is that taken for what they are, they are not terrible songs, they're just lazily written, rather uninspired riff wise, and not very memorable beyond the song's title usually being yelled at your repeatedly at some point during the song. Seriously, this is just one of the biggest disappointments to me this year. For a band I had so much respect for and for what they were doing, this album felt like a spit in the face and then them taunting me.
This record just wound up pissing me off a whole lot because of all the aforementioned reasons above. Frankly, by the time I listened to this enough to write up this review I didn't even feel like writing it anymore and it took awhile just to finally decide to do this write up. You know where this is going, if you're a fan check it out, but otherwise listen to their previous work, this is just poor.
Overall Score: 3
Highlights: The Fore Sermon, You Are The Hunted
Posted by maskofgojira at 8:57 AM