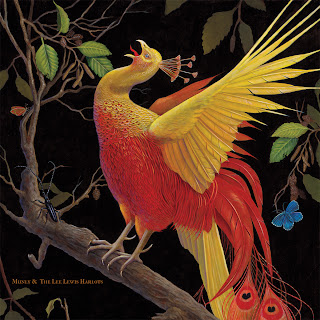 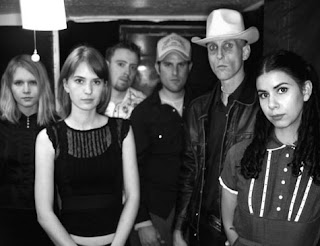 I don't know what I was expecting from this effort from Munly & The Lee Lewis Harlots but I can say that it wasn't what I wound up hearing. For good or bad, Pesanta Urfolk is a label that I don't have a whole lot of contact with but I was reliably informed that this was a good album so I gave it a chance. Boy oh boy was it something different than what I thought.
Simply based on the cover art I figured this wouldn't be more of the metal side of Pesanta Urfolk, what with the more vibrant colors, but that was about it when I first got it. I was later informed that it was a re-release of this band's 2004 album, obviously expanded and remasterd, but I gave it a listen because of the praise that friend of mine gave it. Pretty much from the tone and vibe of Amen Corner alone I figured that this would be up my alley. I'd like to think that I've loosened up in the last year or so and am a bit more open to country music, so when this just kept hitting it out of the park I let it just hit that sweet spot in me that I reserve for this sort of music. When I hear a country record that's done poorly or just doesn't live up to what I want(ed) it to, it's very disappointing, but when I hear a good/great record, it just fills me with that warm and fuzzy feeling because I know that it is genuine and whatever emotion that is being conveyed in a certain song is resonating with me.
This album really goes through some pretty radical tonal shifts throughout from up-tempo fun and what I would call more lighthearted tracks like Old Service Road to much darker and introspective ones like Cassius Castrato The She-Male of The Mens Prison. But between those two extremes there is much ground covered from scathingly cynicism to brutal realism to more subtle bouts of comedy (whether intentional or not, those exist on here), each idea from a given song managed to his home and hit hard. Yet despite all the highs and lows on here the general tone is more up-tempo and fun sounding, with the majority of the darkest and most introspective "man and his guitar" moments leading into band grooves that will worm their way into your head despite the morbid lyrics. But don't think that this is all country stuff, stylistically this album takes several ideas from other genres as well, such as obvious ones like blues and folk rock, but also less expected turns like cajun and pop music as well. While the entire record is catchy, the latter half definitely brings some very pop sounding vocal hooks to the table, Of Silas Fauntleroy's Willingness to Influence The Panel being a prime example of such.
It's all well and good until it's not though, the few tracks that don't lead to that more anthemic tempo and stay morose and low for their duration, the brutal Goose Walking Over My Grave for example, perhaps stick out the most. Because they don't have that, for lack of a better word, poppy sensibility, it just drags you down without any real saving graces, but is stronger because of it. Yes, the chorus of that particular song is strong, like most tracks on here, but because it's so somber and bleak, instrumentally as well as lyrically, it's even more haunting.
It isn't a stretch when I say that this album is really good and good fun to listen to. It's filled with soul and passion but also incredibly dark and morose when it needs to be, and if that isn't a sign of good songwriting than I don't know what is. Perhaps the average person who visits this blog might see this as a strange little detour from what I usually cover (do I even have a style I cater to?) it's well worth checking out because it's got plenty to offer any person willing to listen.
Overall Score: 9
Highlights: Amen Corner, Ragin' Cajun, Goose Walking Over My Grave, Jacob Dumb
Posted by maskofgojira at 8:56 PM