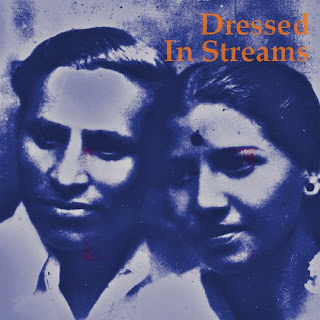 The entire Colloquial Sound Recordings catalog is filled with releases that are interesting and worth hearing (though I frankly haven't heard all of them), and Dressed In Streams is no exception. Having impressed Mr. R. Loren enough with their couple of tapes, he has decided to re-release them on vinyl. Since I haven't covered any of them I wanted to take the time to cover this new release.
In regards to Dressed In Streams you have a project that takes that traditional style of black metal, so raw, distorted, and atmospheric, and melds it with almost The Cure-esque melodies and synth tones. No surprises in the realms of originality, but this isn't blackgaze, this isn't post-black metal, this just happens to be traditional without actually being traditional. Melodies are perhaps the most important aspect to the songs on here, but sonically, it's a lot closer to the whole basement recording jobs that you heard in the 90s. The songs retain that intensity and necrocity that feels closer to that 90s sound, rather than the basement Darkthrone clones that really popped up at the beginning of the 2000s. There's an authenticity there that has been present in all of the Colloquial Sound releases. Most of their releases have had a tendency to take a punk-esque energy and inject it into that lo-fi black metal style, along with some other elements as well depending on the project, but in the case of this project, it gives it a sense of naturalism and energy that is almost never found in a record the sticks this closely to ways of old.
But it's perhaps the moments where it drifts outside of typical black metal is where I enjoy the songwriting most. The second half of The Breastplate Shine or a track like A Quiet Place definitely up that post-punk and/or goth rock influence. The synths come more into the forefront of the sound, the guitars take up a less rigid picking pattern, meaning that it isn't straight tremolo picking for that part of the song. Seriously, it's 2013 now and how many black metal bands have shed their facepaint and spiked armbands for leather jackets and Joy Division t-shirts? Many, but how many have actually fused the two sounds together in a way that even resembles authentic playing and not just studio trickery. Very few. Dressed In Streams appears to me at least to be a project capable of taking the two ideas and actually bringing them together in a way that is unique and is refreshing to hear. It's harsh and aggressive, but also very melodic and, at times, poppy and fun. Between the two sides there is a clear sonic distinction, with the first half having, at least in my mind, a much more varied sound, drifting between black metal and more of that goth rock style, whereas on the second half the styles feel more cohesively fused into a single entity.
Even having heard half of this release already, when it was released on the self-titled tape, this entire album is a great revisitation for me. The songs are fun and aggressive while being incredibly melodic (and not sounding contrived or cheesy in the process), which is more than I actually could have asked for from this project. It's definitely worth checking out if you're a fan of either black metal or goth rock.
Overall Score: 8
Highlights: The Breastplate Shines, Leaping Tiger
Posted by maskofgojira at 3:38 PM