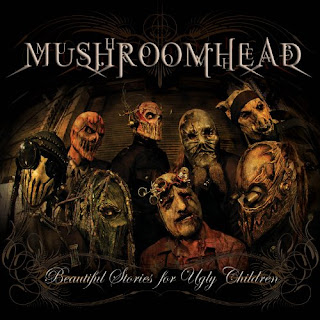 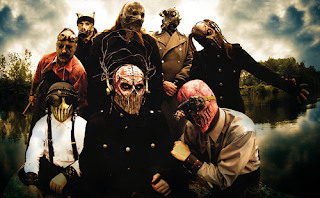 Volume Seven: There They Go Again.

Mushroomhead are an industrial/alternative metal band from Ohio. The band started back in 1993 and have been labeled by some as a darker Slipknot, while their fans and the band themselves will say little on any relation between the two bands. This is their new record following up their last 2006 release, "Sing Sorrow."
I'll be honest right up front and say that besides a few tracks here and there, I've never heard an entire album's worth of tracks from Mushroomhead and this is really my first experience with one. From what I've experienced from earlier listening, songs ranged from boring and uninspired to some cool original industrial tinged metal songs. I have to say that the first single, being the opening track, Come On, leaned much farther to the former of the two. This opening track sounding like a very poor take on 80s thrash and goth combination really just bored me to tears with how actually boring and uninteresting it was.
The use of two vocalists, Jeffery Nothing and Waylon, does add a much needed diversity to the album, though that's something that has occurred for the last few albums. While fans of the band are much more familiar with the strengths and weakness, and preferences to either one, I found Waylon's more hard rock oriented singing much more appealing than Jeffery's industrial crooning. I found that most of Waylon's singing was underused in favor of his screams which, while used appropriately with the verses of certain songs, most of his singing is used to harmony Jeffery's. Though tracks like The Feel do showcase a good mix of both, I found the that the tracks that focused more on melody and less on aggression more pleasing, but that's just me.
Musically, I found what went on in this album pretty dull and underwhelming. Most of the riffs are pretty generic within metalcore, industrial, and 80's thrash metal, not that the music was all that intricate anyway since the vocals are really what this album focuses on. Probably the most interesting on this album, instrumentally speaking anyway, is the keyboards and samples that are scattered throughout each track. Tracks like I'll Be Here and The Harm You Do focus more on the darker industrial tones of the band while other tracks like Slaughterhouse Road and Holes In The Void use them in conjunction with the heavy guitars. What I found a bit odd was the placing of songs on here, as I felt more than half of this album was underwhelming and mediocre, the last handful of songs were actually quite good.
Overall, I'm kind of on the fence with this one, I found the first half of the album really lame and dull, the second half really had some cool songs. While this is most certainly not something that would inspire me to pick up the rest of their albums, I am most certainly interested in hearing more songs. If you're into industrial tinged groove metal, check this out.
Overall Score: 5
Highlights: I'll Be Here, Harvest The Garden, Your Demise
Posted by maskofgojira at 8:03 PM