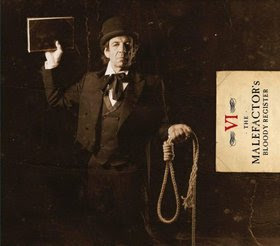 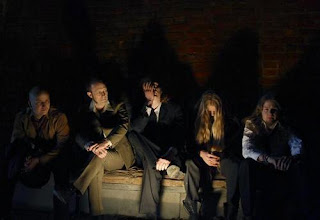 The Killer Took The Lives Of Several Unknowns.

Here we are, three years after the release of 2007's "The Dystopia Journals," and Vulture Industries has returned with their second full-length. Those familiar with that debut will recognize the band's unique take on progressive avant-garde metal is still very much a part of this record's sound. While they are not the most unknown band out there, this has been a very anticipated release for me this year.
After a short, and somewhat unusual, usual, introduction, if you know avant-garde, you'll get that, the album opens up with what can only be said is a very much evolved sound. In a nutshell, what you'll find on this album is not a departure from the debut, but a growth of it, the use of more building, the introduction of catchy melodies, and more abstract song structures. This album still borrows its fair share of Arcturus moments, but it seems to hark back to "La Masquerade Infernale," more than "The Sham Mirrors" on here, mainly due to a more dramatic performance.
While this is not a large leap forward from the debut, it does indeed live up to the band's promise of being more progressive sounding. The songs build and fall a lot more than the songs on the debut did, making use of chugging in an almost post-metal sense, where a rising intensity is demonstrated rather than simplistic one-note riffs; on the other hand, the falls make use of the more abstract side of the band, where it can range from a short dissonant riff to a saxophone solo, a song like The Hangman's Hatch demonstrates both of these very well. The use of even what could be considered a ballad, I Hung My Heart On Hallow Square, on the album also shows the expansion of territory the band have moved into as well.
As one of the band's most identifiable features, vocalist Bjørnar Erevik Nilsen's performance on this album most definitely tops his performance on the stellar first one. I am fully aware that there are those out there that were not so keen on his Garm-esque croons, and those are still on this album, they are no longer the central vocal style of choice. This album contains a broader spectrum of vocalisations, from whispering to death metal growls and black metal screams, both of which were only used rarely on the debut are now on a good portion of the album, hear the first proper track Race For The Gallows.
With an expanded sonic palliate thanks to the growing inclusion of progressive influences, this band not only becomes more interesting and unique, but also more catchy. Tracks like The Bolted Door or Crowning The Cycle demonstrate a larger sense of melody into the band's sound by making use of choruses that are simply drenched to the core with hooks. For some I realize that this will immediately signal the words, or tag, "sell-out," but like I mentioned above, this is clearly more progressive and unique than the band's debut record, and becoming more aware of writing hooks does not mean you're selling out, but merely becoming better songwriters.
Overall, this was one of my most anticipated records this year, and it did not disappoint. While this record did not provide the same feeling the debut did for me, it did give me a completely different feeling. If you like progressive/experimental/avant-garde extreme-rooted metal, definitely check this one out.
Overall Score: 9
Highlights: The Bolted Door, I Hung My Heart On Harrow Square, Of Branded Blood
Posted by maskofgojira at 5:15 PM