Stargazer - The Great Work of Ages 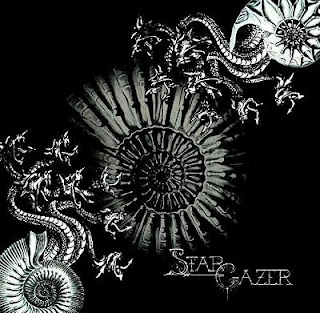 The Foreboding Sense Of Impending Doom.
Stargazer is an avant-garde/death metal band from Australia. This is the band's follow-up to their 2005 album "The Scream That Tore The Sky." This album is yet another notch that Profound Lore Records can add to their wall of fantastic releases.
The sound that Stargazer make use of is very unique and unlike what is even considered to be death metal in modern days. The music itself is very different, making use of stop-start patterns as well as speeding up or slowing down throughout a course of a single song. On here you'll find a band that can maintain a very intense and tense sound while making use of multiple genres and styles. The styles, to state them out anyway, include elements of old-school death and doom metal like Autopsy, early My Dying Bride, and even Incantation, but also elements of black metal, grindcore, and a bit of technical prog as well. What surprised me to find out was that this is only a trio.
The production on here does serve to give this record a very authentic feel. Being only a trio, this recording allows every member to be heard very clearly, Passing Stone - Into The Greater Sun for instance, while one never really overpowers the others. This also serves to keep things sounding like a real sort of performance in front of you, almost live if you wish, except for the occasional studio effect.
I think anyone that listens to this album will be able to see quite easily that every member of this band is talented and plays their respective instrument very well. The guitar playing gives you a lot to work with, moving from dirge like sludge/doom riffs into quick tremolo picking or a thrash groove, then just opening up into more clean work every once in a while as well. The bass is well performed as well, it cuts through the sound just enough to be heard and appreciated, but not enough to become annoying; and the bass-lines on here often bring to mind groups like Cynic or Atheist in their more jazzy flow that really does add something different to the music. The drumming is obviously well performed as well, it keeps a very steady control, or sorts, over everything else going on, seeming to keep the bass and guitar from just flying off the handle.
For those that have not heard of Stargazer, there really isn't any easy way to get into them, since they only have two full-lengths and several splits, but this would be one of the easier things to find from them. Due to the music's complexity and often use of tempo and time shifting things can become a bit hard to grasp onto, but possibly one of the easiest tracks to hear would be Hue-Man-King, the first song released from this album. I only suggest this one due to it's more graspable structural shifts and stop-start patterns are a lot easier to wrap your head around on a first listen.
Overall, like mentioned above, this is a great album with some great songs and playing. This is easily one of the best death metal releases of the year, very few other band's have as unique a sound as these guys do in this day and age. If you're a fan of technical and progressive death metal, definitely check this out, it'll be hard to find a lot that's better than this one from 2010.
Overall Score: 8.5
Highlights: Pypes of Psychosomatis, Chase For The Serpent Song, Formless Face of The Timeless Faceless
Posted by maskofgojira at 9:22 PM