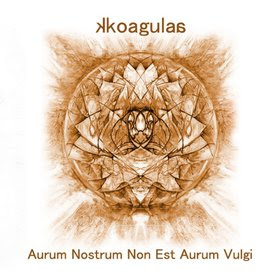 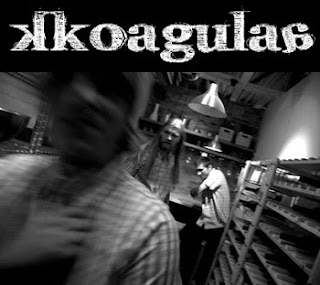 Kkoagulaa is an avant-garde/electronic/metal group from Norway. The band was formed out of the ashes of one of Norway's principal experimental groups, Manes. Though this is the first record to be released, after several individual noise/electronic tracks by themselves, but still carries with it some of the tendencies of more recent Manes sounds.
Those that have fallen in love with the early or even more electro-rock Manes had used might be disappointed with this record. Those that were familiar with that band could tell you that with each consecutive release, they got weirder and more abstract sounding, this album is yet another step into unknown territory for the band. With each release Manes continued to move farther away from "metal," briefly returning with their final recording "Solve Et Coagula," then disbanding. This could very well have been the route Manes could have gone on their next release.
This is a single track spanning over fifty minutes. Don't assume, like I did, that this will be some sort of massive, experimental mix of electronic, rock, and symphonic music, because rock is pretty much gone on here. Guitars can still be found occasionally in the background, but they rarely go into anything that really sticks out, usually playing jazzy chords or simple chord progressions. Beyond that this record is really more of an electronic album, taking bits from trip-hop, ambient, dubstep, symphonic music, and industrial music and putting them in a blender together. There are a lot of open and atmospheric spaces in the music, but also very mechanical sounding orchestral work, synthesized beats, and other odd noises going on.
Onto the vocals, they're there, they're about as weird as the music. On here you'll hear, vocally, sections of chanting, spoken word, singing, there's even someone burping around the 22 minute mark. The weirdest thing on here is the lyrical content, from what I actually could make out and put together, it felt very abstract and almost random at some points, making use of days of the week, science references, and society's darkest edges all at some point are mentioned on here. There is also, what I would assume, a guest appearance from Shining's own Niklas Kvarforth in the final 15 minutes of the track.
Overall, this is a pretty dull record from an extraordinary group of musicians. It almost pains me to say so because I hold Manes to such a high regard in their bold experimental nature that I found this record most appealing when I let it play in the background. If you want to hear an experimental/electronic record, there are ones better than this that have come out this year, or just check out mid-period Manes releases.
Overall Score: 6
Highlights: It's Only One Track
Posted by maskofgojira at 5:11 PM