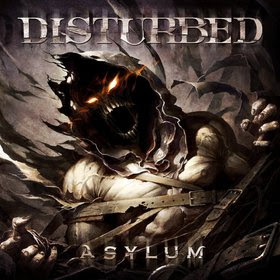 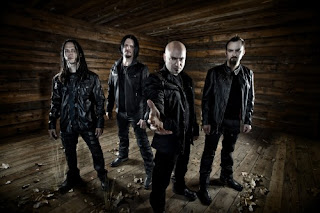 Back Into The Loony Bin.

Disturbed is a alternative metal/hard rock group from Illinois. Everyone has their opinions about the band, their style, and what have you, but I've been a long time fan, especially following 2008's "Indestructible" record. Now, whether you like them or not, this album is being reviewed.
Now, lets face it, this album has been hyped to death, mainly by lead vocalist David Draiman. Before this was even released there were two official videos put out for it, the title-track, Asylum, and Another Way to Die. But the band themselves, once again this is mainly Draiman, have been saying that this is some of their darkest, most melodic, and aggressive material released; and to their credit, that is partially true on here.
Let's settle the hype right now, musically, on here you'll find what was mentioned above to some extent, but let's not allow Draiman's words about guitarist Dan Donegan creating songs within songs fool us, there are plenty of songs on here that are solid, but they're not that complex or layered. Donegan is a solid player, his playing on songs like Warrior and Crucified showcase some of his best playing and writing yet, unfortunately it's Drainman's vocals on those tracks in particular that kill the potential of those riffs. That's not to say that Draiman is a bad vocalist, he certainly has a polarizing style, but he's not bad, but the melodies on those particular tracks are just boring. But back to Donegan's guitar playing, it is reminiscent to "Indestructible" in it's more rhythmic riffs, solid solos, and melodic interlude sections, but it doesn't really tread into a lot of new ground.
I've read some things saying that drummer Mike Wengren's performance on here sounds lazy, and that is most certainly not so. You can't really call him lazy for not putting double-bass and poly rhythms in every song if it doesn't call for it. Tracks like The Animal really show some of his best playing yet even if it isn't the most complex he's done.
Onto Draiman himself, he is doing everything he's always done, in more ways than one unfortunately. This album certainly has some of his best performances on here, but some of it feels rehashed while some parts are just bad, hear Warrior again for his failed attempt at screaming. However his presence isn't all a hindrance, tracks like Serpentine and My Child really show more range and strong melodies than ever.
Overall, this is a decent record, but is not anywhere as epic or different as Draiman had promised. Pretty much, this is their last record redone, not a whole lot is that different. If you like melodic, groovy metal, check this out.
Overall Score: 7
Highlights: Asylum, Serpentine, Innocence
Posted by maskofgojira at 1:06 PM