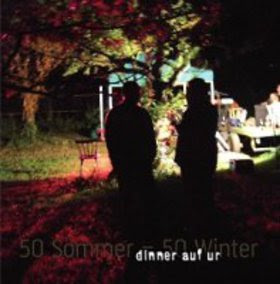 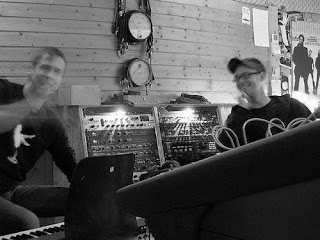 Rock From The Dark Side Of The Moon.

Dinner Auf Uranos is a avant-garde/psyche rock band from Germany. Members from this band come from former German progressive black metal band Nocte Obducta. According to the main composer of both projects, Marcel Breuer, this album is a compilation of stuff written from near the end of 2006 onward.
Anyone that is familiar with Nocte Obducta could tell you that they were never the most accessible black metal band, often writing songs that went into Dream Theater length, that's the ten plus range. This record kind of has a mentality, but is far less metal than even the later albums from Obducta. As a composer of many different styles, Breuer himself has stated that even early in Obducta's career he had kind of relinquished the idea of being a "black metal" band. That mentality carries on in this debut album, where it's not quite prog, but it's not quite metal, but a sort of weird amalgamation of that and more.
This record comes off like a mix of post-rock, 60's psyche folk rock, a bit of Pink Floyd prog rock, hints at metal here and there, and a vocal style that sounds like Rammstein, if it sounds weird written out, you'd be surprised how well it fits together. You'll find that this record really just flows better than a lot of other records giving it a bit more of a live band performing in front of you. The passages in Zwischen Dem Salz Und Montpellier that move from post-rock builds to and almost Isis-like crescendo before falling into a Pink Floyd psychedelic moment. The climbs and falls on here really fit better than a lot of, if you don't mind a personal opinion, NeurIsis bands coming out today that don't have a lot of personality, though it's a bit hard to even call these guys metal anyway.
Probably the track that will grab people the most is the 22 minute Töte Das Jahr Für Mich. Not to put down the other tracks, and because two other tracks top five minutes to begin with, this track is really the epitome of the album. Pretty much, if you found something you liked on the four tracks before this one, this one will have those found in here and a bit more. It has to be said that with all the different melodies going on in this song, the bass-lines are just as good, really giving the track that heavy groove to keep the track from going into post-rock oblivion. I know I probably say this a lot but despite the length of this track, it actually manages to move faster than some of the tracks before it.
Overall, this is a record that could really be the right record to scratch a post-rock/psyche rock itch. While this never really leans too far in one particular direction I still think fans of the styles could find at least one thing on here to appeal to them. If you like Pink Floyd prog or post-rock atmospheres definitely check this out (or if you like Rammstein's vocals, the music sounds almost nothing like them though).
Overall Score: 7
Highlights: Texas Della Morte, Töte Das Jahr Für Mich
Posted by maskofgojira at 8:25 PM