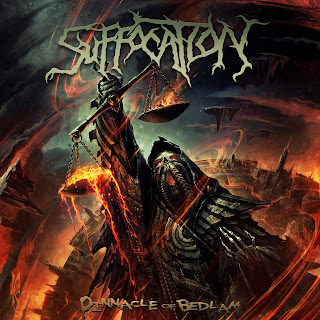 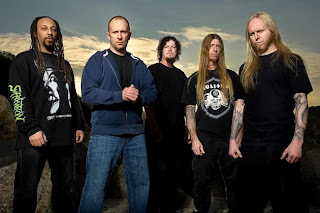 In the last couple of years, my interest in death metal has seriously waned, but albums from bands I like and respect I will always make time for. I've been a long-time fan of Suffocation (in the sense that they were one of the earlier death metal bands I sought out and listened to) and purposely tried to find time to listen to this album. Being that it is vocalist Frank Mullen's last album before he will stop touring with the band (it will remain to be seen if he will continue to work in the studio with them), I knew that this was a death metal album I had to take a stop out for.
Anyone who doesn't know what to expect coming into this album should just stop reading right now and just pick up a handful of classic death metal albums before reading any further. I'm not going to bother explaining this band's history or how they have risen from the past and brought us some of their best material since first reuniting back in 2003. What I will say is that you will in no way be surprised by this album if you have listened to any of the band's last handful of releases. This is typical Suffocation, nothing you haven't heard before done by these guys or their peers, and while I'm not exactly giving this thing the highest of compliments, it does keep consistent in terms of songwriting in ways that many other bands just don't anymore. This is typical Suffocation, it's technical, at times brutal or melodic, but always death metal and if you don't already know what that is - like I said, go out and buy a bunch of death metal records from the 90s and have your fill.
In terms of how this stacks up to the band's work, I will say that it did not impress me to the degree that 2009's Blood Oath did. While stylistically the band haven't changed too much, if at all, since then, that album had some production choices that definitely filled out the band's sound in a way that grabbed me a bit more. This is a lot more of a meat and potatoes style of production. It's not bad, just very standard for death metal today where it's clean and polished with clicky drums, low and mid heavy guitar tones, and vocals at the very forefront of the sound. I don't have a problem with that sort of production, but it's very by the numbers for today. Frankly, I preferred the slightly more muddy production on older albums if only because it made me feel like the band were writing material that was dark and menacing, with production as clean as this, it just doesn't retain that darkness (or at least not on this record). That darker sound was what made records like Effigy of The Forgotten and Pierced From Within so iconic for me when I first started listening to death metal. For me, the highlights on here were very obvious even on first listen, as they were the tracks that actually stood out from the rest with some pretty solid riffing and some nice growls from Mullen. I've seen that some really have taken to this album, which is fine - to each their own, but this one didn't really do much for me that other modern death metal albums haven't as well. I'll return to the tracks I like and probably listen to the others once in a blue moon as well, but it's not going to be on constant rotation either way.
By and by, this is a pretty standard modern death metal album that offers little more than above average songwriting from a band that, I believe, has done far better in the past. It's not a bad album by any stretch of the imagination, but it's not a great album either. If you're a fan of the band or death metal in general, you're going to listen to this regardless of what I have to say, but in closing, I guess I'll just go listen to those early records now that I'm done with this one.
Overall Score: 7
Highlights: As Grace Descends, Sullen Days, Inversion
Posted by maskofgojira at 2:37 PM