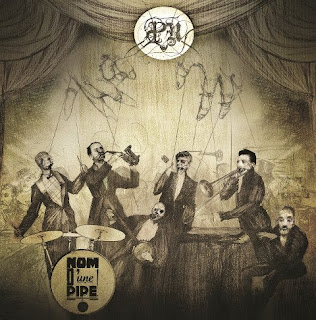 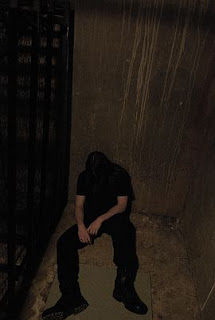 Vaerohn's project Pensées Nocturnes has proved to be one of the most interesting and unique groups to emerge from the whole "depressive black metal scene" that really grew in popularity in the late 2000s. Having been more in favor of avant-garde orchestral arrangements over repetitive guitar strumming, both of his previous full-lengths (if you don't include the troll album Ceci est de la Musique from 2011) have proved to be some of the weirdest releases of those years. Anything Vaerohn puts his name to is certainly worth hearing in my book and a new full-length from this project would be at the top of my list.
For my money, I'd say that easily one of the best bands/projects/etc. to make anything of value under the "symphonic black metal" tag in somewhere around the last decade or so, would be this project. Vaerohn is definitely a man who knows what he's doing. Instead of using simply symphonic elements to either pump up an ordinary extreme metal song, or even build a song around the orchestral instrumentation, his Pensées Nocturnes is one of the very few bands out there right now who I can say fully integrates orchestral music with black metal, and to a great degree on this album, jazz as well. On his previous two full-lengths, those of us who listened to the project were witness to one of the most abstract and well developed uses of symphonic orchestration in extreme metal since Vladimir Cochet's work in Mirrorthrone. The orchestrations didn't seem like a separate part of the music or an afterthought, but an actual extension of the extreme metal being played. Whether you had Baroque inspired movements playing against blast-beats or flourishes of horns playing over a rather slow doom part, it worked - for better or worse you can decide, but I say it worked.
On this album, Vaerohn has really brought out more of that jazz element of the project. The orchestral work is certainly still there, but, at least to me, there wasn't as much Wagner or Chopin on here as much as Piazzolla or Badalamenti. The music was perhaps even more abstract, bringing in an even wider assortment of instrumentation including an accordion during several instances. I'd also be willing to say that there's at least a bigger embrace of the work of Mr. Bungle (one of my favorite bands). With some nice funk inspired sections and some rather exaggerated wailing and operatic vocalizing on Le Marionnetiste for instance, it just struck me as some Bungle-ish influences creeping through. For as much as I dig a band like Sigh, I would say that Vaerohn manages to make better use of orchestral based sounds and instruments than they do despite working in a somewhat similar context (extreme metal with lots of outside influences). To return to the Bungle reference again, the entire album is given this live performance sort of dynamic where after certain sections of songs, a clap track will accompany a conclusion. It's silly and sort of unnecessary, but it reminded me of all those extremely silly and frankly stupid things that Bungle did on their debut full-length, yet both Bungle and Vaerohn make it work to their advantage.
Another thing I have to mention is my love for the drum sound on this record. Unlike a lot of metal records today which make use of very clicky kick drums and poppy snares, this drums on here are much more naturalistic sounding. I almost want to call it flat sounding, but that makes it sound like a bad thing, but the kicks are never intrusive of the rest of the music and the snare is nice and booming without sounding like it's reverbed to hell. The bass doesn't stick out too often, but when it comes out to play, it certainly leaves, at to least me, an impression. The guitar work is a nice blend of standard black metal tremolo picked work mixed in with neo-classical arpeggios and jazz and funk inspired chordal work and play.
It's silly, bizarre, quirky, dark, and playful all at once while never once forgetting that this is still an extreme metal project. I am well aware that this project certainly doesn't appeal to a vast majority of people, but in the past I was captivated by the oddity that this project was, now I am captivated by what the project is able to do. It's a record that far surpassed any expectations I had set for it and is one of the best things I've heard so far this year.
Overall Score: 9.5
Highlights: Every Track Is A Highlight
Posted by maskofgojira at 2:33 PM