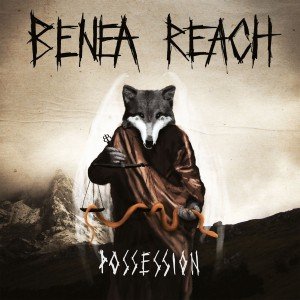 Despite really enjoying the whole tech metal and djent scenes to a pretty high degree, Benea Reach was a band I never really paid a whole lot of attention to. I was well aware of them before the big djent craze in the last couple of years, but even then, I might have listened to their 2008 album Alleviat once. But I made a conscious decision to give this album a listen when it was finally released.
I guess one could call Benea Reach a pre-djent band because, along with a few other groups, they were copying Meshuggah first. Though I don't know if I'd give them as much credit as other groups like Textures (who have a far more textured sound) or Ion Dissonance (who were far more chaotic), they certainly do deserve some respect for trying to make that sound their own before the internet exploded with one-man bedroom projects of people chugging on their low-E/F strings. But, then again, to say that what these guys were doing before this album was all that inspired would be saying a lot more about their sound than I happen to think is warranted. Their early work is very typical of what many bands are now doing in the groove metal and djent genres now and listening back to them now, they really don't sound all that special to be honest. So, with this new album, I have to say I was let down by just how typical it was. There really isn't much on here one couldn't find done better in some way by another band. The grooves aren't as complex as Monuments or Vildhjarta, the riffing isn't as catchy as Periphery or Animals As Leaders, they're not as atmospheric as either TesseracT or Uneven Structure, so what does that leave left?
The answer is not very much. This is basically a mix of modern djent tropes and melodic death metal, if that grabs you, then great, you'll probably really dig this album. I'm a fan of djent, obviously, and while I don't check out as much melo-death as I once did, I am certainly still open to being impressed by it, but the fusion that this band does just isn't good enough I'm sorry to say. I hate to just pick this thing apart but I have to say, the production is rather average, and in comparison to all the groups mentioned above, this just gets the job done and nothing more. In my opinion, it's pretty standard modern melo-death styled production, where guitars take the lead focus until the vocals come in and then fall in line with the synth during a chorus or more atmospheric part. The guitar work is more or less focused on groove, with some more melodic parts thrown in for the choruses - of which I actually have no complaints about; but the groove based riffs just do not cut it. They are very average and if you've heard any of the albums from the bands I listed above and then listen to this, I think we can reach a common ground that what is on this album is just not good enough anymore. And maybe it's just me, but I've never been particularly fond of Ilkka's vocals, so it surprised me when I actually didn't find them irritating me when I first listened to this. Then I listened to it a couple more times and it just got worse and worse for me. While I can tolerate his singing and his growling is passable, when he just lets out some of his higher pitched screams, it just irritated me to no end, which is a real shame because that's his main style on one of the album's best tracks, Crown, but my god if his performance on Constellation isn't just one of the most annoying I've heard in quite some time. I'll gladly admit that, overall, his performance on here is the best I've heard from all the albums he's been on, but I'm not sure if that's saying all that much to begin with. I really don't feel good saying that this album has more in common with a modern metalcore (melodic metalcore if that makes anyone feel any better) record than any of the best djent or melodic death metal albums out at the moment.
I hate to say it but I just found this album to be a real chore to listen to from start to finish, and that is something that one should never feel when listening to an album. It has to be said that while I find this album to be uninspired and rather dull, none of the performances are what I could call bad. This is nothing to write home about, but if you insist on listening to this, just don't blame me if you don't end up liking it.
Overall Score: 4.5
Highlights: Crown, Empire, Aura
Posted by maskofgojira at 12:17 PM