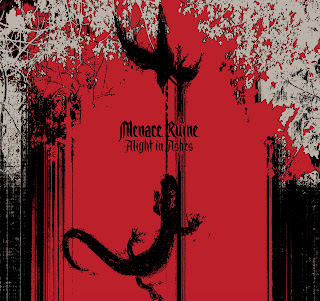 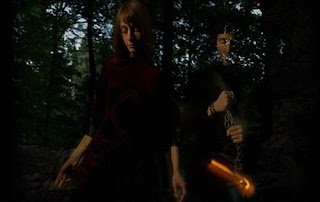 For the longest time, I've had trouble getting into the Canadian duo known as Menace Ruine. Maybe I just didn't understand them at the time, but I just found their albums to be incredibly hard to take. Because this album is coming out on Profound Lore, I actually decided to give this one a shot.
The duo of Geneviève Beaulieu and S. de La Moth have been sculpting monoliths of blackened noise for several years at this point, something even I am willing to admit about them. To me, even though I certainly respected the hell out of them, their sound was always just one of those that seemed foreign to me when I was listening. Since then I've come to listen to many raw black metal and blackened noise groups and projects so maybe if I listened to them now I actually might like them now (who knows), but it seemed rather strange to me that Profound Lore would sign them. For all the experimental groups the label appears to be picking up, Menace Ruine still stand out in their roster as one of the most abstract. I'm going to be upfront and say that for this album I actually didn't go back and listen to the duo's past material, but I was actually rather impressed with this. I think that the ideas on it are a little more towards what I'm comfortable with on a sonic level. I can appreciate the forms of harmonic distortion used on tracks like the opener Set Water to Flames or Burnt Offerings more than I remember being able to dig into the more neo-folk leanings of an album like The Die Is Cast. But maybe that's even an understatement to how much my tastes have changed since that side is embraced on here as well and I can tolerate it as well.
The aesthetic of this album contains that sort of mystical quality that I happen to find within groups of the neo-folk and martial industrial genres more than those that are typically associated with metal, but given that it's this duo I shouldn't be all that surprised. While I do remember hearing traces of it on their previous albums, once again, I didn't connect with it the way I was on here. Even though I can't say I'm the biggest fan of the duo, even after listening to this album, I will admit that this is one of the most seamless fusions of blackened noise and martial industrial music I've ever heard. Yes, I'm well aware that the number of bands who choose to embrace both those styles into their sound is very small, miniscule even, but there will be those who know the bands I'm talking about and they will understand this. And the bands who do take those two sounds, most to a smaller degree than this album does, actually do the mixture quite well, so it is saying something when I say that this is one of the best fusion of those ideas. Obviously, this sort of music is not everyone's cup of tea, and more than likely won't appeal to a huge number of people even with Profound Lore's backing, but there will be those who do pick it up because of the label and will find something different and interesting (at the very least) when they put this album on.
Frankly, my entire experience with this album is just a matter of circumstance, I used to not get them, this time, I think I do understand what they're getting at - or at least more so of what they're getting at anyway. The duo are still creating slabs of abstraction in genres that will be somewhat tough to swallow, but actually are rather interesting when you sit down and concentrate on what they're doing. If you have the patience for it and happen to enjoy more experimental depictions of metal, industrial, and neo-folk music, by all means, check this album out.
Overall Score: 8
Highlights: Arsenikon (Faded In Discord), Disease of Fear
Posted by maskofgojira at 12:29 PM