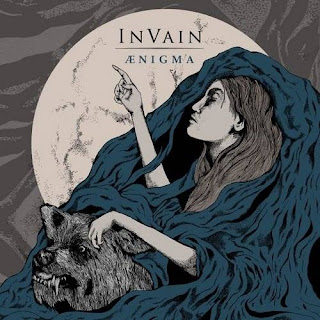 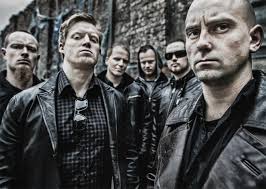 I have been following the band called In Vain for several years now and I have to say their progress has been a bit surprising. They're a band who started out with a very interesting debut than released a second album that was really well done but a bit of a mess stylistically. With this third album I wasn't sure where the band was going to take their sound next.
When I first listened to this album's opening track, Against The Grain, I have to say I wasn't all that impressed; but saying that doesn't mean I didn't like what I heard. It's certainly not a bad song, but knowing what the band sounded like on the previous two albums, it wasn't a big shift from the sound that they worked with on their second full-length. It was an aggressive song that had a strong foundation in black metal with some solid clean vocal sections breaking up the death growls. I have to say I my first impression was actually surprised because it wasn't a big or flashy track that demonstrated a change from their previous material (as their second album had with Captivating Solitude). Then came Image of Time, which for all intents and purposes is basically a solid blackened-doom track (nothing special) that happens to feature Lazare Nedland and Cornelius Jakhelln (of the mighty Solefald). It's not an overly spectacular track but their presence made it a track that I returned to quite often. But up to the third track, Southern Shores - an interlude - I have to be honest and say that I was actually pretty disappointed that the band were essentially rehashing the formula they did on Mantra. Open with an aggressive black metal song with a big chorus, then a slower song (by comparison), and then an interlude. In my opinion they were just doing the same thing they did on their last album and I wasn't too impressed.
The first three tracks were perfectly fine, but to be frank, the band didn't really grab me when the members of Solefald weren't performing their vocals on the aforementioned track. I'm sad to say, the band didn't even grab me like I wanted them to on here. Just to restate my earlier opinion, none of the songs on here are inherently bad, they just didn't live up to either of the band's previous two full-lengths in terms of songwriting, experimentation, or darkness. That isn't to say there aren't highlights on here, the longest tracks on here certainly show everything that I like best about the band. The double-bass pounding away under the staccato black metal chords that open up Culmination of The Enigma is really great (one of several great moments in that song actually) and the tremolo picked lines that carry Times of Yore are two of quite a few stellar moments on the second half of this album, I just happen to think it's a shame that there weren't more like them on the first half. It's actually quite a stellar second half to be honest. The four songs that make up this half of the album are strong and bulky slabs of blackened metal, which is an easier way of saying each genre that the band employ on here. It nowhere near as diverse as the band's last full-length (stylistically I mean), but it's a whole hell of a lot more cohesive. From what I've read thus far, that was the intention of the band and many people appear to like this album because of it. In that regard, it is certainly a step up from their past releases, but I can't help feeling lit down by the way this album is performed. Even with how strong I feel the second half is, the acoustic bits did feel a bit tacked on to me (like they weren't all that essential to the way the songs were progressing) but that's just me.
It's solid, but not as great as I had hoped it would, or could, have been. The band has talent, clearly, but this album seems uncharacteristically safe for them and I prefer the stylistic mess of their second album or the black metal dominated sound of their first over this one. Not bad, and clearly it hasn't let a lot of people down it has me, so check the band out if you haven't already, but this one just isn't up to par in my opinion.
Overall Score: 7
Highlights: Culmination of The Enigma, To The Core

Posted by maskofgojira at 12:51 PM