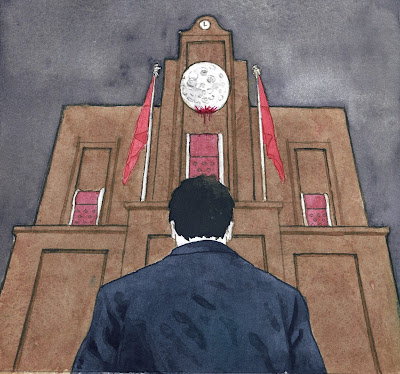 Obviously, I haven't been writing as much as I once did for this site (I won't go into too much detail) but I should say that that doesn't mean I haven't been listening to as much music. I was sent this album by the band late last year and even though it did take me a few months to finally listen to it, I did give it several spins in the last few months. I've never called myself a hardcore or punk fan, so forgive me if my views are a bit unfavorable.
This thirteen track affair was something I was a bit trepidatious going into because punk is a genre that could go either way for me. I have never claimed to be a huge fan of punk music (I bring it up because it has been called into question before) so my tastes may not be the most interesting, but I know what I like to hear. I say it whenever I review a hardcore record, I like it when I can feel the passion of the musicians playing, when it doesn't come across to me like just another studio record but like something I could imagine being played in front of me as I listen to it.
I guess the first thing that got my attention when listening to this was how haphazard the songwriting was. Now, I don't mean that in a bad way (even though it probably sounds that way), but I think that while this record doesn't exactly put forth the energy I mentioned above in the performances, I think that the passion comes through in just how wildly chaotic some of these songs are structurally. It literally sounded to me as if the band were just thrashy wildly about while trying to play these parts as clearly as they could (once again - not meant as a criticism). The way a song like Blood, Ash, Shattered Glass just seems to disregard genre and jumps from hardcore punk to doom rock to thrash metal in the course of three minutes is impressive to say the least. The way the band manage to portray a different idea in almost every track does show how talented these guys are. I do have to say that if there was one pitfall for me it was the band's cleaner vocal delivery. In and of itself, there isn't anything wrong with it, it actually sounds quite like the sound of a lot of old-school punk groups; but that isn't a style of singing that I'm particularly fond of. On the other hand though, the harsher vocals, whether they were just shouting or the semi-death growl, I actually thought did the band more justice.
But I guess one of the best things I could say about the band is that no matter what they choose to do with a track, they manage to make it work. The length of a given song was never an issue for me in regards to this album, and I know that might sound like a rather backhanded compliment but when you consider how many "progressive" bands slog out songs that top eight minutes or how many grindcore bands pump out songs around a minute in length, the fact that this band can pull off both is a testament to their skills as songwriters. But I guess I have to be fair and say that there was one track on here that I really did not enjoy at all and that was the closer Conclusively, I Reject Instrumentality and All Was Well which was more like a straight-up, old-school, melodic punk song which is not my style at all. It sort of made the album end on a sour note for me.
So, as you have probably figured out by now, but I obviously enjoyed the vast majority of this album. This band is really talented and hopefully they don't try and simply their sound but keep pushing it into even further extremes and experimentation because that's where they are at their best. Fans of punk music, hardcore, even prog rock to a certain extent I think will dig this.
Overall Score: 8
Highlights: Half Dissolved, ...And Tribulations, Grey Skies Over Red Hook
Posted by maskofgojira at 9:37 AM