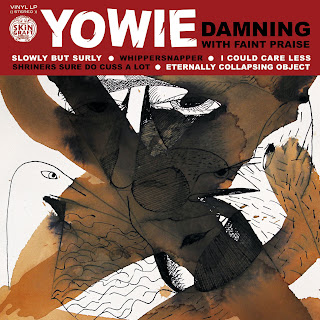 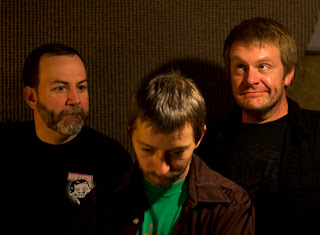 I was first notified about this band by one of it's members due to my Guzzlemug review. Any band that would associate themselves with Guzzlemug (a band who I now have a great amount of respect for) gains some interest from me immediately. I was quite impressed with what I heard on first listen and decided to give the entire album a go.
As I happened to state in my review for Guzzlemug, I thought that what they were doing is what modern progressive rock should sound like - challenging and unique; and while Yowie are very different from Guzzlemug, the same thought can be applied to both groups. The members that make up Yowie obviously play less with metal ideas and more with spasms of math rock influenced quirkiness. It's the sort of sound that is quite off putting on first listen because each member appears to be playing something completely different to what the other members are doing only to reconvene occasionally and bring the song together. Each song just sort of scrambles your head while all you as the listener can really do is sit back and try to absorb everything that's being played. So, with that in mind, it wouldn't be a stretch to assume that there really isn't a whole lot of memorable songwriting on here - and to an extent you'd be correct in that assumption. Frankly, however, with how out of control some of these songs were I could really care less because they were frenetic and intense as anything you'd hear from the likes of The Dillinger Escape Plan but without the vocals or as much distortion. The sound comes across as all the stranger due to the rubbery sounding guitar tones. To go back to the whole progressive rock thing for a second though, while this band is clearly indebted to the sounds of math rock, I do think that they bring more of that jazz rock intensity which isn't found so much in math rock. Like I said, there isn't that heavy rock or metal distortion on here, but there are several tracks on here where it could match any tech metal or grind band in a contest for intensity (I'm not saying blast-beats though). They switch tempos and patterns so frequently it's actually quite jarring - but I think that there isn't enough of that in modern progressive rock.
I thought this was a pretty damn impressive piece of work - not perfect, but definitely interesting. It has all the intensity needed to satisfy fans of more aggressive music, but isn't heavy enough to scare away more "arty" fans. It's certainly worth looking into if you're up for some strange sounding progressive rock.
Overall Score: 8
Highlights: Whippersnapper, Shriners Sure Do Cuss A Lot
Posted by maskofgojira at 1:09 PM