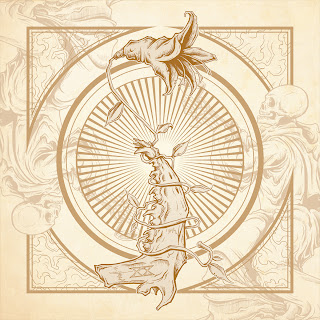 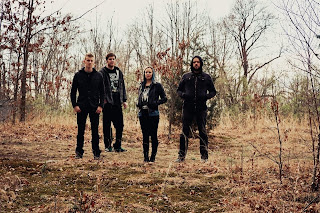 Last year I wrote up a small review for Black Table's first single, Heist. I was very positive towards that one song and knew that the band were definitely onto something unique after listening to it. The real test was going to be whether they could craft an entire album/EP/demo worth of material that would stand up to that one song, and late last year, I got my answer.
With the release of this four song EP, the sound that the band were aiming for becomes a whole lot clearer. As much as I enjoyed Heist, which also opens up this EP, you really can't judge a band based on a single track - no matter how good that track is. It was all going to be down to how those other three tracks would come across that would really show if Black Table was onto something. Though it shouldn't come as much of a surprise, the band do pull off a pretty interesting blend of ideas that really works. I remember first hearing about the band and I was told that they combined elements of grindcore into their style, and while there are some more dissonant sounding riffs, I really didn't hear much of anything that would truly hint towards that sort of an influence. It made me think more of Deathspell Omega than Extreme Noise Terror - but that's just me. Aside from that though, the band do a pretty damn good job at playing a more progressive influenced form of mid-paced black metal. Yes, there are blasts for those of you wondering, but it rarely came across as a fast paced release (or song). One thing I really liked about this album was how clear and fluid sounding the bass tone was. The way that it stands out in the mix and doesn't really clash with what the guitars are doing is certainly to the band's credit for having enough confidence in their playing to allow the bass to actually lead certain sections of these songs, hear the title-track. Closer 1942 definitely left the biggest impression on me though, with the clean chanted vocals that opened the track that then just morphed into a more angular black metal piece, it has everything that I would love to hear the band experiment more with in the future. It's those smaller touches that may seem like simple experimentation now, that may eventually blossom into something quite extraordinary in given time.
Though I was hardly skeptical about whether the band could pull off material that would match their first song, this definitely went above my expectations. There are some really interesting ideas on here that set the band apart from their peers and do hint at something special. With a debut release as strong as this, I have high hopes that future material will be just as good, if not better, than what the band have demonstrated on here. Overall Score: 7.5
Highlights: Sentinel, 1942
Posted by maskofgojira at 5:11 PM