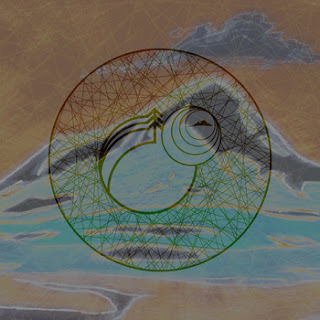 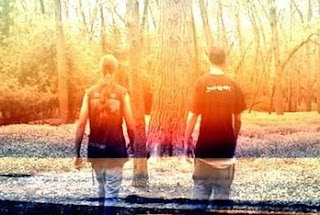 I'd like to think that I'm a pretty big supporter of Njiqahdda's work. I think that the duo are really interesting and continue to push themselves into new sonic directions and while being extremely prolific. After a year (being 2012) where the band released material on smaller formats like EPs and splits, it's nice to have them releasing a full-length again.
Those people who have been following the duo that is Njiqahdda over the course of their recent releases will know that a shift has occurred. No longer do we have long and winding pieces of progressively tinged black metal that wandered into the realms of krautrock and soundscape music but more of a straight-up progressive sound. The black metal element of their sound has gradually been replaced with more of a sludge and/or post-metal sort of vibe. Over the course of recent smaller releases the band has played around with elements from symphonic music, traditional sludge metal, electronic music, and more obvious progressive metal ideas that, at least for me, were hit and miss in terms of how much I actually enjoyed them. They were all interesting for sure, but I can say that not all of them were my cup of tea. With this full-length, the band have already polarized quite a few of their fans with some really enjoying this change in their sound while others are extremely disappointed by the shift away from black metal. I have to say that on my first listen, and I'm sure it was this was with most people who have followed the band for a while, I was surprised by the sound of this album.
For me, The Path of Liberation From Birth and Death was an album that really saw the duo transcend into realms that no other bands or projects had reached with black metal. Perhaps the reason for the shift was because they felt they could no longer progress beyond that point within the confines of black metal and have moved into slower and more groove based territory. There aren't as many frantic paced riffs that run circles around the listener's head like they did on the aforementioned album above, but instead more repetitive cycles of groove based riffs that bring to mind Horseback more than Meshuggah (hopefully that helps clarify what groove means in this case). You also have more obvious inclusions of choruses, The Veil of Allaeius for example, that may turn the heads of some fans for the band's shift into more straightforward songwriting styles. But probably the most glaring shift will be the use of clean vocals for the majority of this record. Whereas in the band's early releases, vocals were obscured, whether they were sung, growled, or screamed, they felt more like a part of the music that a point for which the listener could gravitate to for an easy entrance into the music. In more recent releases, the vocals have moved up and have become clearer in the mix, but it wasn't until last year's To Escape The Tide EP that I really became aware of the shift into these cleaner sort of vocals. Granted, they are by no means soaring; but every time I hear them, the cleans and the growled vocals, I always get reminded of the vocals of guys like Aaron Turner of Isis or the early vocalists in The Ocean. More of a throaty growl that comes from the pit of one's stomach than a full-bodied death growl - if that makes any sense.
While the first three tracks on here are full-on metal tracks with occasional flourishes of technical guitar play, on She Which Water Holds, the album takes a turn into the realms of psychedelia. Yes, those grounds are by no means new for the band, but whereas the two have coexisted somewhere in similar planes on previous releases (metal and psychedelia I mean), on here, the band descends from plodding heaviness into more moody psychedelic rock and folk ideas that I can't recall hearing from them before - even on their fully folk based releases. The album shifts from that of being more of a "post-metal" (overarching term applied here) into a heavier progressive rock album. For me, listening to this, it made me think that this is the perfect blend of the two aesthetics and styles and I constantly found myself thinking that this would be the perfect album to term as "post-progressive", but hey, that's just me.
I thought this was a really stellar and unique jump for the band, taking their sound into new areas that I surely never expected them to go down. Personally, I preferred the winding esotericism of The Path of Liberation From Birth and Death more than the psychedelic journey that this album takes, but both stand as formidable pieces of modern metal transcending simple genre tags. Definitely an album worth listening to this year, though if you're new to the band it might not be the best of places to start.
Overall Score: 9
Highlights: The Veil of Allaeius, She Which Water Holds, ...And The Men Behind The Sun
Posted by maskofgojira at 2:22 AM