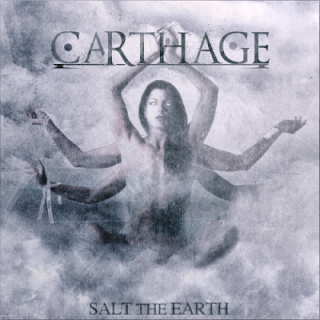 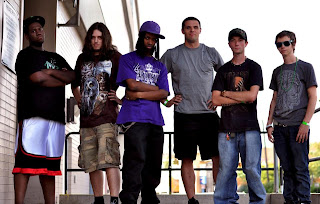 Back when Carthage released their debut self-titled EP last year, I had absolutely no interest in the band. I've been a fan and supporter of guitarist Tre Watson since he released his first solo album, but even that didn't interest me. Frankly, I'm not even sure what interested me in this album but I had some free time recently so I decided to give it a go.
I've probably covered more deathcore this year than I ever wanted to, though considering how much was actually released this year, it's actually very little, and I was pretty let down by most of them. I just happened to listen to this album during some free time in between some classes because I had read some good things about it and had heard that the band were making use of 9-string guitars. The latter fact was more than likely the thing that drew me into the album more than anything else, though I can't say that was the thing that made me even want to hear it. If bands like Meshuggah and a handful of other djent bands can popularize 8-string guitars and a guy like Ihsahn can actually make them work beyond low-end chugs, than I wanted to see how 9-strings were going to be used on here. I'm aware that there are 10-string guitars out there and I am interested in seeing how bands adapt to all this low-end, whether they use it for low-end or manage to do something interesting with it. After listening to this album all the way through and having sat with it for a few weeks now, I can say that the three guitarists in Carthage certainly do know what they're doing with the extended range, but that doesn't mean the songs they're writing are great. I could definitely see some people getting irritated by the sound of that ninth string though, because it is low and it sounds very mechanical. I didn't find it to be all that distracting, but I did find myself becoming increasingly annoyed by it if I focused directly on when and where that low string was being used (I don't recommend doing that for this or any other album by the way).
I'll certainly give these guys props, they do bring together a rather nice blend of influences that certain span across modern deathcore and djent into stuff like melodic death metal and the occasional break into technical death metal as well. I can't take anything away from these guys for the combination of styles, but personally, I found a majority of songs on here rather lacking in the memorability department. Obviously this is just a personal complaint, because from the comments and reviews I've read, others have apparently not had this problem with the album. I think the melodies being played are perfectly well done, but I found myself struggling to remember them after the album had finished. The majority of vocals on the album weren't my cup of tea either, and I did think that the vocals ruined a track like Maelstrom, which I found pretty insufferable because of them. I'm just not a huge fan of the tone of the lead vocalist on here, mainly because he sounds like the vast majority of other deathcore vocalists, and I just find that tone to be rather grating. The clean vocals were alright, not great and you can tell the guys doing them aren't clean vocalists by trade. These guys certainly won't be in the league of great clean singers anytime soon, but they do the job perfectly well. In my opinion, I found tracks like Exegetics and To Return some of the best material on this release because they really presented a sense of energy and some nice grooves which I didn't really find on the majority of the record. I like dissonance and more spastic sounding stuff anyway, so I'll certainly say that that's the sort of style that appeals to me more than deathcore/melo-deathcore/whatever you want to call it.
This is a pretty decent album, I don't think it's anywhere near as amazing as I had read it was, but it's not bad. These guys clearly have talent, but I just find some of the material on here to be weaker than others. If you like deathcore or djent, or even modern sounding melo-death and metalcore, you'll probably dig this as well. I should just say, if you like modern metal, give this one a shot.
Overall Score: 6.5
Highlights: Pushing Forward, Exegetics, To Return
Posted by maskofgojira at 1:47 PM