Gorath - The Chronicles of Khiliasmos (2012) 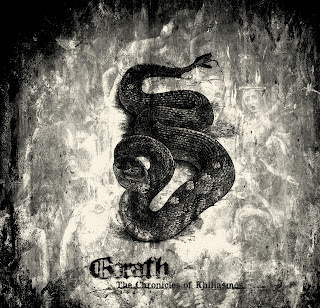 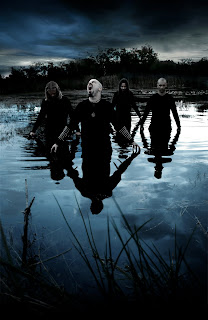 I've been following Gorath for several years now and it's always a treat whenever they release a new album. It's a shame that when I first got this album, I was told that this would be the band's final album. I think that's a real shame because Gorath are a band who are always doing something interesting, and I will sorely miss them.
In my opinion, Gorath is a group who don't get as much attention as they deserve. They've consistently released albums that are different from what you think they're going to be. They're a group who has shifted their sound with every album they've released, and this album is no different. Whether it happens to be the more progressive sound on 2008's Misotheism, the more stripped-down and direct MXCII, or the dissonant technicality of last year's Apokálypsis (Unveiling The Age That Is Not to Come), not to mention their first two albums, they're a band who like to keep their sound fresh. In the case of this album, I was expecting the band to continue with the more technical sound they used on their last album, though I really should have known better because the first time I listened to this I kept waiting for that explosion to happen. This is easily the band's slowest and most doom oriented sounding album and it shows a considerable amount of restraint on their part. The only point when you get a sort of release is during the album's centerpiece, and shortest track, Khiliasmos II. It's much more plodding and heavy than I can say any of the group's past releases have ever been, and that was possibly the biggest surprise to me while listening. In a sense, it's sort of as if members of Deathspell Omega and Neurosis decided to make a band together.
Obviously, seeing as there are only being three tracks on the album, the attention will more than likely be focused on the twenty-one minute long closer, Khiliasmos III, and for good reason. The comparison to the two bands I made above is really where it comes into play. It's a song that is sluggishly crawling along with a dissonant sense of guitar playing and spacey synth chords haunting the background. Honestly, with the length that it is, I have to admit that I was slightly disappointed that the track didn't display more of the band's progressive or technical edge but just sort of plodded along - having said that, I do believe it to be the best track on the album. The riffing takes a bit more of a straight-up doom quality in the latter half of the track as well, bringing in some bluesy guitar lines that I certainly never expected to hear. Personally, the only thing I didn't really care for about the track was that the last four or so minute were essentially droning feedback and atmospheric effects. In some groups, that's fine, but it's not what I listen to Gorath for.
As I stated above, I think it's a real shame that Gorath has decided to disband since they only get more interesting with every album they release. This album has proven to be among their most ambitious and they've truly left on a high note. If you're interested in more progressive forms of black metal, listen to this album and then go out and listen to the band's back catalog as well.
Overall Score: 9
Highlights: Khiliasmos III
Posted by maskofgojira at 11:08 AM