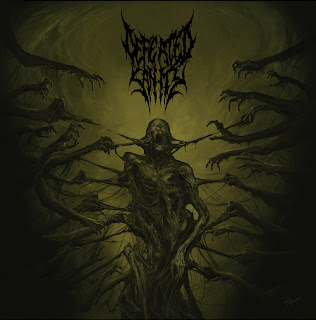 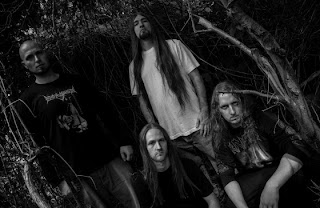 Obviously, as anyone who comes to this blog enough will know, I'm not a huge brutal death metal fan - as I state at the beginning of almost every review having to do with a band in the genre, but I do enjoy Defeated Sanity. Whether it's due to their more technical slant or that they can actually write something that moves away from low-end slogging, I don't know, but they do this style well. So with this new album comes yet another new vocalist and hopefully they can surpass what was actually the really solid effort that was their 2010 album Chapters of Repugnance.
What's the best way to open an album like this? Well in the case of Defeated Sanity they throw you right into the pit with guttural gurgles and low-end crunching. Is there really any substitute for an intro that make it feel like you've had your head pressed into muddy dirt? Well, after that minute long intro that is Initiation, the band then take you right back to where you were when you last played one of their albums and you remember who you're listening to. If you were a bit thrown off with that minute long chug intro, Naraka brings you back to where you want to be with a Defeated Sanity album, low-end grind with some technical excursions, interesting time changes, great playing from the rhythm section of the band, and some guttural gurgles. It's pretty much why I regard this band so highly in their field, they don't just chug away in the low-end for the entire duration of a given song but actually thrown in some more interesting technical breaks. The bass playing and drumming have always been stellar as well and it continues on here as well.
I guess the thing that impressed me the most on here, or at least the thing that has stuck with me the longest, would have to be the lessening of breakdowns on here. They're certainly still on here, but they don't feel quite so restrictive as they have in the past, as if the band is breaking away from the hold of the genre standards - which is a good thing. There's more straight-up brutality and technical interludes than breakdown chugs. Tracks like The Purging or Perspectives really bring out everything that the band does well, while showing off a less standard sound. They have all the hallmarks of what older fans will want, but are also technical enough to intrigue fans of more modern technical metal. Maybe not every track will appeal to them, but there's more than enough technical ecstasy to grab them and keep them interested.
It's a very good piece of work and it stands as the band's crowning achievement thus far in their career. There aren't many bands in the genre right now who can challenge Defeated Sanity - they do it brutal and they make it interesting. Definitely worth picking up if you're a fan of brutal, technical, and jazzy death metal.
Overall Score: 8
Highlights: Naraka, The Purging, Perspectives
Posted by maskofgojira at 10:25 PM