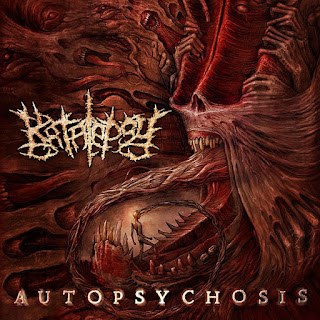 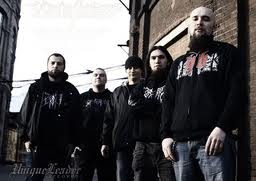 Here we have an album from a band who I was only familiar with through their name. It was one of those cases where you're (or me in this instance) scrolling through various songs on Youtube and stumble across something unexpected. That was how I first found out about this album and decided it was worth looking into a bit more.
It wouldn't be a stretch of the imagination to assume that this band is just another brutal, slam death band. I mean, just look at the signs: you have an extremely violent/gory album cover, the band write their name in a very unintelligible fashion, and the band members are trying to look really tough in their promo photos. But wait, only the last one is actually true for this album. I cover isn't covered in blood or make a whole lot of reference to misogyny and the band logo is actually legible, so what's this album going to sound like? Well, surprisingly good actually. Sure, it's brutal death, but these guys have a pretty modern take on it and don't skimp on technical flurries, making good use of those 8-strings they hammer down on on occasion. I mean, you still have the low-end slogging, the guttural growls and toilet bowl gurgles, and some several slams on throughout, but the actual amount of effort that seems to have actually been put into these songs does come through. It's not just another slam death record that you can put on your CD case/mp3 player and put it on shuffle and then guess who you're listening to, these guys actually have a sound that stuck out from the pack - or at least I think they do.
From the sort of stuff that I usually tend to associate with Unique Leader, this came off as far less polarizing and annoying. It's probably just me, but I did appreciate how these guys didn't just plod away - yes they have a couple of tracks devoted to keeping the br00tal d00ds happy, but the majority of this album appealed to me, which means that it took in more technical and, perhaps most surprisingly, melodic elements. Yes, the melodic parts are few and far between, but whenever they would pop up, my ear would instantly prick up and it would draw my attention directly to it no matter what else I was doing at the time. A fan of the more technical and good bands on Sumerian Records could pick this record up and more than likely find it just as appealing as those bands, it has all the right elements that would allow for a crossover to happen. Let me also take this time to mention that the use of low-end 8-string heaviness is not overly used on here; and let me also say, there is no djenting on here (for all those wondering about that). Whenever I heard it used, it was just a lower, and actually harder hitting, than sections when they weren't being used. It's well done and a far cry from the aimless chugging, djenting, and low-end slogging that this record so easily could have become.
I thought this was a pretty damn good piece of work and it really surprised me cause I never expected to like an album like this. These guys definitely have potential and from what I've listened to of their first record, this record is quite the step-up. If you're a fan of brutal or technical death metal, definitely take the time to check this record out.
Overall Score: 8
Highlights: Cold Flesh Citadel, The Pulse of Somnambulist, Knifed Humility
Posted by maskofgojira at 4:52 PM