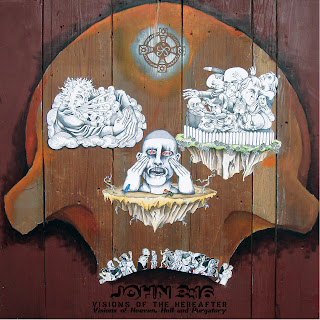 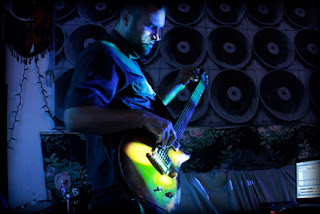 Earlier this year, I became aquainted with John 3:16 through his split with FluiD. The material on that split definitely was interesting and made me aware of the project, but I wouldn't say that I became a fan yet. When I was told about this new album, what I had expected would not have prepared me for this.
Obviously industrial music has taken many forms over the years, but post-rock has a sound that is pretty static (for better or worse). There are plenty of bands doing things with the genre, but the concept remains relatively the same in one band as it is with another. The combination of the two is not a new idea, although I'll admit that it certainly isn't a common one, it was not the route that I expected this project to take. The sound I heard on the split mentioned above certainly had material that was impressive, but when I put this album on for the first time I was shocked by not only how well it was performed and arranged, but also how interesting and memorable it proved to be. I found several melodies throughout the album to be quite beautiful and rather moving. It's the sort of album that really takes the best parts of both genres and crafts a new breed of the two that is unlike anything else out there. Obviously, the album can't be all shiny, shiny, pretty, pretty though, and there is the dark side. So it has to be said that both are taken on board and delivered with the same high level of quality.
The concept for the album is no doubt ambitious. Personally, I find that anyone who decides to make a concept about the nature of death, the afterlife, and the existence of God to be rather interesting, but bold as well. That boldness is also something that could an ambitious record into a pretentious one very easily, and god knows how many records I've heard where that's been the case. I think this is one of the albums that takes it to the height of its philosophical beliefs by remaining instrumental (which makes this record devoid of actual personal beliefs being spouted at you). I'm sure someone reading this will now be scratching their head and asking how an instrumental record can take these philosophical ideas to their natural heights, and the answer to that is that what it says in the song-titles, the music does. I mean, there are a couple of spoken word and chanted phrases in here, but the music embodies the various points of ascension and descent to a t on here because it is free of someone essentially telling you this grand concept. The album is essentially one long trek through the various realms of the afterlife, ever connected, yet entirely separate at the same time. The darkness of a track like The Inner Life of God/The Father, The Son and The Holy Spirit is immediately contrasted with the beauty of Through Fire and Through Water and it works because the emotion of the composer is transposed onto the music itself. It tells a story, and the story does not simply stop from one track to the next, but keeps going. When you finally hit that end point, it all just loops over again. The concept is forever, and truly never ends, but keeps turning, just as life itself is constantly moving. When one life ends, another will begin, and when this album ends, it will be replayed, over and over again.
This was a fantastic piece of work and an album that really surprised me. Nothing I would have imagined John 3:16 doing could have measured up to the heights that this album actually managed to. It's a great piece of work and if you're a fan of experimental music or post-rock, I highly urge you to check this out.
Overall Score: 9.5
Highlights: Every Track Is A Highlight
Posted by maskofgojira at 9:28 AM