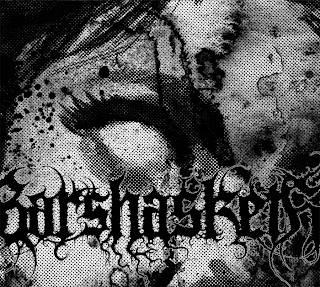 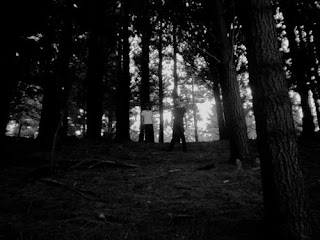 I received word of this album from the band themselves several months ago and was quite taken with the track they sent me as a "teaser." What can be said for a band that does black metal in a way that lives up to the genre name. Months later and I've finally written this up.
When I first listened to the song this band sent me (in order to get an impression as to whether I would cover this album) I was under the impression that they were more or less of a straight-up black metal band. A black metal band who knew how to construct a song with melody, but a black metal band nonetheless. So, as you might imagine, when I finally sat down to listen to this whole album from start to finish, I was actually a little surprised by the band's dynamic range. Yes, they can pull off those blast-beat sections with aplomb and the mid-tempo stuff as well, but their use of slower (not doom-tempo mind you) sections was what really impressed me because it brought out the most in the melodic work. I'm not one to criticize a band for trying to keep things interesting while staying consistent with their sound, but I did find that on the more straightforward tracks like Bitter Sagacity, I was not as engaged with what they were doing. It's not that the band do the regular black metal stuff badly or anything, it's just that I prefer dynamics and when they mix it up, it kept me interested and wondering where they would go next. I should also mention - in terms of stylistic dynamics - the band have a pretty solid grasp at more atmospheric playing as well. Longer tracks like Malaise and Sonnets to Orpheus demonstrate a sound that is somewhere between more atmosphere driven black metal bands and post-rock climaxes in that whole post-black genre. I mean, it's not enough that it's going to scare away those who aren't fans of that/those sub-genres, but it did occur to me to be noticeable enough to mention.
I guess while listening to this, while I admire the band's songwriting abilities and dynamic range, what struck me the most was the abilities of the drummer on here. On each track I was continually surprised by what he was doing. Sure, I'm not going to say that he's breaking new ground in terms of this style of music, but I thought that his fills were very nicely utilized and played. His work didn't overemphasize any part in particular but it also doesn't undersell his work either. It appear to me as though he kept his performance reigned in to a nice degree to where he would keep a song going and fulfill all the standard practices of "black metal drumming 101" but always manages to sneak in some fills and shifts that aren't won't be found in the everyday black metal record. To a certain extent it sort of reminded me of the 2010 record from a band called Gorath, MXCII, in that that was another record where the drummer stood out to me and delivered a performance that was interesting given this genre of music. Though, honestly, I would say that this band isn't quite as progressive as Gorath - make of that what you will.
In terms of modern black metal, this is the sort of record that will be able to appeal to those who prefer the more traditional as well as those who like a bit more of experimentation thrown into the mix. There's some aspects to the band that I sort of wish were a little bit less "set in stone," but that's just my tastes. Fans of black metal in general will find something on here to like (I know that's very broad, but this record does have the ability to appeal to different groups of fans).
Overall Score: 8
Highlights: L'ange Du Meridien, Sonnets to Orpheus, Schlußstück
Posted by maskofgojira at 8:02 AM