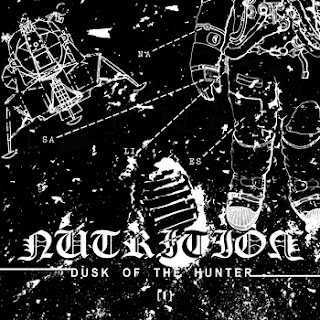 I don't exactly recall off the top of my head how I first stumbled across Nutrition, but I certainly remember covering their 2010 EP, Eye of The Anunnaki, and liking it. To be honest, I hadn't really kept up with what the duo was during in the time in between that EP and this new one, but apparently they've been working even harder at writing material, since this is just the first part of two albums (from what I've read). Finding this little release certainly reignited my interest in them and made me go back and listen to their work all over again.
I have to say that Nutrition has quite a knack for writing interesting sounding industrial/ambient soundscapes that acts as interludes, openers, or closers. Each of their three releases, including this one, has made use of cold atmospheres with industrial beats and some really interesting samples, and that's basically what you get from opener Forbidden Moon. Dawn of The Hunter I, the longest track of the five on here, is easily the best track and makes use of everything that Nutrition does so well. For those that have yet to find out what the signature Nutrition style is (to briefly summarize), it's a sound that features driving black metal riffing, drums that morph from the standard drum-programming into more electronic beats, and high-pitched screeches. It's rather unfortunate that the last three songs don't end up measuring up to the first two tracks though. While these last three tracks are by no means bad, they don't keep up with the standard of the first two tracks and instead take a more heavy metal/thrash metal kind of approach to riffing and focus on pretty standard song structuring. The last two tracks, especially, are rather simplistic and the vocals actually proved to be quite annoying (at least to me). I'd imagine that there will be plenty of others that will find these tracks to be more memorable, but they just felt rather uninspired to me and were more black metal by numbers sort of songs that didn't really do anything all that different.
Overall, of the three EPs that I've heard from the duo, this is the weakest, in my opinion. It's not bad, but it certainly isn't as engaging or memorable as the previous two were, but I could certainly see this acting as a gateway into the band for many who are unfamiliar with their previous releases. If you like industrial black metal with some more traditional metal influenced riffing styles, I'd say check this out, but if you want to hear them at their best go for the first two EPs.
Overall Score: 6.5
Highlights: Forbidden Moon, Dawn of The Harvest I
Posted by maskofgojira at 2:39 PM