I don't cover a whole lot of thrash metal, mainly because a lot of it just winds up sounding too much alike for my own tastes, but I do enjoy the genre. Recently, I've been listening to a lot more "blackened thrash" groups and so I thought I might as well cover two groups that are in that sub-genre. Hopefully, you can find some enjoyment from either/both albums. 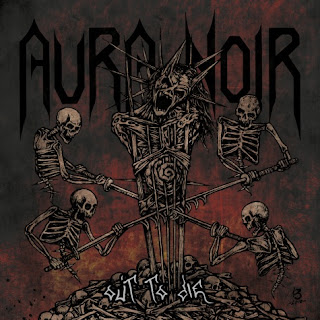 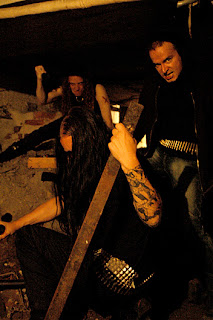 Carl-Michael Eide is a true madmen among musicians, and I mean that in the best possible way. I have yet to hear a project that he's involved in that isn't at least a little weirder than the other bands in the genre he's playing with at that time. Of all his projects, Aura Noir is one of the longest running and has been the most consistent in their sound throughout his career thus far.
When coming into an Aura Noir record, there are certain things I expect to hear, one them being memorable riffs. While I can't say it's been this way for the four full-lengths that have come before this one, albums like Deep Tracts of Hell and Hades Rise stood out because they had riffs that stuck out by being both memorable, and slightly less typical than the average thrash metal riff. Eide has kind of made the band stick out over the years by writing riffs that, while are certainly based in thrash and early black metal, always have weird tendencies that made them stand out, either by breaking them up in a staccato fashion or by adding a weird tail to the end of the riff in question. On here, that really isn't what has come out. Be sure that this is certainly still leagues ahead of other thrash metal groups, but it doesn't have that weirdness that I've always prided the band on having. In addition to that, the band sound as though they're channeling the spirit of Morbid Tales-era Celtic Frost, whether that's good or bad I have yet to really decide upon. There's also a bit more of an old-school NWOBHM harmonic element in some of these songs as well, which I rather enjoyed, hear tracks like Abbadon or Priest's Hellish Fiend, and did stand out from the band's usual raw and stripped down approach towards production. It's a headbanging and fist-pumping album, what more could you want from an, essentially thrash metal, album.
While it was on, it was very enjoyable and a gripping listen, but it wasn't as powerful as I guess I wanted it to be. It's a quick, in both length and performance, listen that doesn't eat up too much time, so if you're worried about it taking up too much time if you think you won't enjoy it, give it a shot. Blackened thrash, wish it was a little weirder based on the band's back catalog, but this is barebones, and it's a good album nonetheless.
Overall Score: 8
Highlights: Abbadon, Withheld, Priest's Hellish Fiend 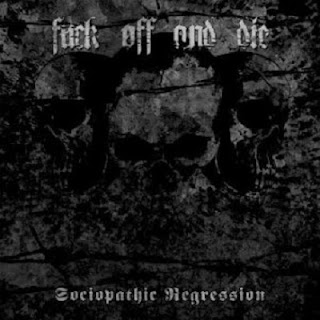 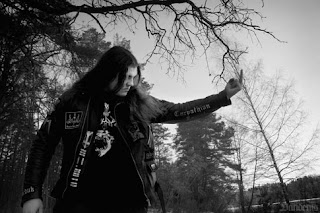 I have to admit that I had never heard of Fuck Off and Die! before seeing this album so this is a new band/project to me. I don't cover a whole lot of thrash metal on here, mainly because I just don't like a lot of it, but I am a big fan of thrash-influenced riffing and enjoy it when bands manage to incorporate it into their style. I thought, because this project was tagged as black and thrash metal, that it would be pretty solid and worth checking out.
Fuck Off and Die! in comparison with the album above, leans far more to the black metal side of things. I was rather surprised when I first heard it because I kept anticipating the project to launch into a thrash-oriented riff which very rarely actually came. With that being said, I don't want to give off the impression that this album is devoid of thrash metal riffs and influence, because it's certainly there, but I think I just wanted more of it. Opener, or really the second track since there's an instrumental opener, An Instant of Martyrdom, does a really solid job at mixing thrashy riffs with intense, blast-beat infested drums patterns. For how many tracks occupy this album, you'd expect there to be a solid amount of songs, but I actually didn't find a whole lot memorable about this album, to be honest. It's not bad, but I would have liked to have heard some more substance. With seventeen tracks, and most of them under three minutes, a lot of these tracks wind up just blending together, especially later on in the album. A handful of songs on here wind up sounding good while the others sound like ideas and unfinished ones at that, which is a shame because even if the album is a bit redundant, longer songs, even if they were only a minute or so longer, might have made the difference. Though I haven't heard any of Fuck Off and Die!'s earlier material, I've seen that they've had cover songs on both previous full-lengths which happen to range from Blasphemy to Cripple Bastards, but I don't think I ever would have foreseen a Silencer cover. Their cover of Sterile Nails and Thunderbowels is pretty solid, not nearly as emotionally powerful as the original (though I'd be nearly impossible to ever replicate that), it's decent enough.
It's decent enough, and I could definitely see other people who are into more raw thrashy black metal being more into this than I am. Like I said above, it's not bad, just a bit monotonous and repetitive. I'd see any reason why fans of black metal wouldn't enjoy this, thrash fans might have a harder time to be honest though.
Overall Score: 6.5
Highlights: Crescendo of Apocalypse, Soldier of Disgust, Fists of Solitude
Posted by maskofgojira at 5:33 PM