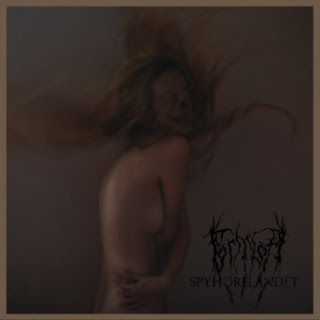 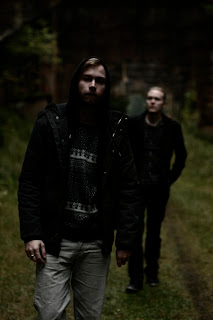 Despite knowing about Formloff for about a year or so now, I never checked them out until I heard this album. I'm well aware of my preferences towards the experimental black metal genres so finding bands that are working within the frame of no-frame concept is one that obviously appealed to me once I began listening to this album. In retrospect, I really should have checked this duo out before, but live and learn (you can probably tell how this one is going to go).
The style in which this duo choose to embrace on this album is one that owes quite a large debt to the likes of Carl-Michael Eide. Bands like Ved Buens Ende and Virus can be heard all over this record, and I don't mean that as a negative thing or a criticism. Whether it's the thick and jazz bass lines that runs underneath all of these songs or the guitars which weave in and out of harmony, recalling black metal, noise rock, jazz-fusion, and post-rock all at once without really ever coming off as derivative. There are build-ups that climax into crazy and dissonant melodies as well as blasting black metal sections that fall into near sludgy calm downs before speeding up again. I should mention that if you are not a fan of music that moves around in various directions throughout the course of a single song, you will probably not like this, despite the fact that the duo keep the entire album pretty consistent in terms of how each part sounds in relation to others. Despite how various genres are blended, this album never really veers off into Mr. Bungle genre-hopping territory (even though I love Mr. Bungle) and instead blends elements from the genres listed above, and more, together into a more natural fusion of ideas.
Now, I'm not the sort of guy who likes to toot my own horn, but I think having listened to (probably) dozens of bands that have been called avant-garde and progressive black metal, despite whatever intentions and influences a group draws from musically, it's hard to really be creative. I'm not immune to bands of the genre treading similar ground, chances are if you're labeled as "avant-garde" or "progressive", I'll wind up liking it either way, but it's the fact that it's getting harder and harder for groups to truly stand out, even in those genres. While the ideas on here won't technically put these guys into the avant-garde league, despite the use of saxophone on Mig Og Drit and the closer Drokkne I Ei Flo Ta Åske. I certainly stand by the Ved Buens Ende and Virus comparisons as two of the more noticeable ones on here, but vocally, I found a striking similarity between the vocals on here and of Kvarforth of Shining (Swe), and it was enough to make me double-take and make sure he actually didn't guest on the album. He didn't by the way. While these elements might not seem all that unique in the long run, let me say that in the long line of bands who have cited the likes of Carl-Michael Eide as an influence, very few have managed to take his maniac style and actually incorporate it into their own. It's more than apparent from this album that this is a band who are more than capable at doing something interesting with the black metal sound.
Despite all of that, the album still has enough sense to be melodic when it needs to be. Songs like the title-track or Skævven feature far more accessible gateways into the album through choruses that are engaging as well as melodies that are interesting. It shows that no matter how weird you try to be, it always pays to have a semblance of melody in your work. While I highly doubt that the melodies are what will draw people to check out this band, in my opinion, it's the element that will draw you back for repeated listens. I should also say that most of the melody comes out closer to the middle and end of the album, with the first couple of tracks being far more abstract.
I thought it was a great piece of work that definitely stands out among the many bands who attempt to pull off dissonance with melody as one that actually does it right. While I imagine quite a solid amount of people digging this, I can foresee others who aren't too interested in the dissonant and abstract side of the band, as well as some that might not enjoy the more melodic side; or I foresee it being a polarizing album for some is what I mean to say. I am definitely looking forward to what these guys put out in the future.
Overall Score: 8.5
Highlights: Spyhorelandet, Skævven, Drokkne I Ei Flo Ta Åske
Posted by maskofgojira at 9:37 PM