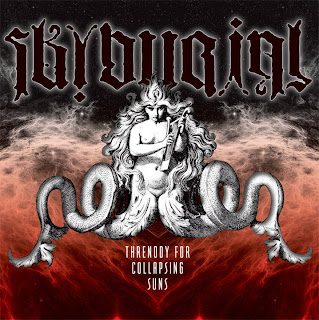 When I received this album, the cover struck me, as well as the title, which I personally think is actually pretty cool. Sky Burial is a project that I hadn't looked into, though I have heard the name before, that I thought was actually quite interesting after listening. Small Doses has been releasing some pretty cool stuff recently and I was interested in hearing if this would continue the good work.
As a three track affair, what you can expect are three tracks that really build and surge throughout their ten-plus minutes. As the introductory epic, Return to The Peripheries has a lot to live up to, luckily it manages to accomplish quite a bit. The rather mechanical sounding ambiance that haunts the background provides an interesting backdrop to the swells of feedback that come in and out of the track. The slow builds that gently climax at the track's end may feel a bit unsatisfying for some listeners, what with the track never really picking up any steam along the way, but I believe that the end justifies the means in this case. Now while I wasn't too keen on the almost techno-ish synthe that popped up now and then throughout the track, it's just a personal distaste more than anything, the more minimal synthe worship that's used throughout the rest of the track allowed me to almost forget about that one glaring portion of sound; and just to clarify, I actually enjoyed the higher pitched melodies that were used near the end of the song, not the lower and more bass heavy ones.
The other two songs, which are much shorter in comparison to the opener, bring perhaps a more "defined" ambiance to the album. I'll admit, the first track is a bit tiring and a journey, but the rest of the album is a lot easier to get through. While certain parts are certainly claustrophobic at times, I do believe there are moments where there is too much going on and it doesn't really fit, I did enjoy these more ambient pieces more so than the droning opener. It's the quieter, more tranquil moments of this album that I found to be Sky Burial at it's best. Now, the album never really reaches a "loud" point, but I'd say when minimalism is being used to it's full effect, than you're listening to the album at it's best, in my opinion anyway. There are moments where this thing just reaches a point where it just climaxes in an unexpected way, and that's something to really be praised. It's odd to say that ambiance can reach a climax, but in the case of The Cadence of Collapse, it does just that, and I loved every second of it. I feel the need to point out that that track in particular is perhaps one of the most touching pieces of music I've heard all year as well.
It's a solid album, maybe a couple of minutes could have been shaved off here and there, but for the most part it's still very enjoyable. At it's worst it's a bit boring, but at it's best it's just relaxing and tranquil. Definitely look into this album if you like more experimental minimal ambient or drone music.
Overall Score: 7.5
Highlights: The Cadence of Collapse
Posted by maskofgojira at 11:27 AM