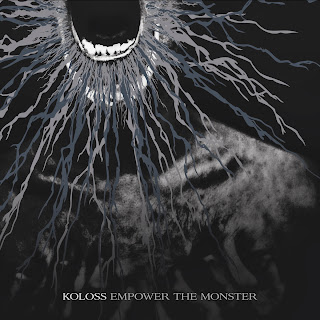 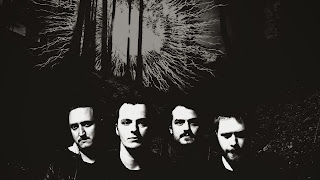 I covered Koloss' debut full-length back when it came out in 2011 and thought it was a solid, if somewhat generic record. After reviewing that record if you had asked me about the band I probably wouldn't have remembered them, and it wasn't until I saw the covered art for this record while looking through bandcamp that I thought I had covered the band before. As I have said many times in the past, a cool looking cover can definitely help as to whether or not someone decides to listen to it.

While the intro to opener From The Sea (The Birth of A Monster) may lead you to believe you're in for just another doom metal record, about two minutes in the song abruptly changes pace and your find yourself drifting not in a black sea of doom and gloom but an ocean of psychedelia. While the moment is fleeting it's probably the most telling moment about the band in this one minute long section. Anyone can do heavy, and being a post-metal band doesn't really hold the meaning it once did since so many bands have emerged and have essentially just done what all the biggest bands were/are doing. While Koloss' debut may have given glimpses of talent, it was by and large a more average album from the genre. But in that one minute long section, the revealed, to at least me, that they are capable of so much more. The use of open space and melodic guitar lines filling that minute of time in the song just grabbed me and I wish that the band had either repeated it in the song or on the album, or had just extended the sequence cause it was really that good. Though to be perfectly fair to the band, since the entire album plays out like one long song, the fact that they do at least reference it later on is at least something. There are plenty of mellow/softer moments on here with clean guitars which are well done to say the least, I just wish that one minute long section from the opener was used again. But now it probably just sounds like I'm bitching.

Beyond that the band do at least do a solid job at performing and writing the post-metal genre. If you've heard of any of the figurehead bands of the genre than you know what to expect going in, the only difference being that Koloss have obviously done the work and are trying to at least do the genre in their own way that isn't a complete rip-off of other bands. There's no faking here, nothing gives the impression of the band not liking what they're doing - and believe, I've heard several post-metal records where it sounds like people just going through the motions, so in that way I do give these guys more credit. There's also the fact that these guys do embrace the whole doom genre more than a majority of their peers. Those distorted sections have the weight that most bands in the post-metal style lack, and it actually carries through that the weight of the guitars does actually feel like a giant monster (Pacific Rim style) smashing out of the sea and smashing its way onto land. In a strange way I'd like to call this a more progressive album than the band's debut simply because they're tackling that whole "one long song as an album" concept, but musically they don't really dive that far into that sort of territory.

While this review may have come off a bit negative, I don't actually dislike this album - it's quite good in fact. There are certain aspects I wish the band had explored more of in the making of this album, but otherwise I think it's a solid attempt to make a rather stale genre their own. If you're a fan of the slower side of metal I do recommend giving this a listen and making your own decisions about it.
Overall Score: 8
Highlights: From The Sea (The Birth of A Monster), Building Arks
Posted by maskofgojira at 7:38 PM