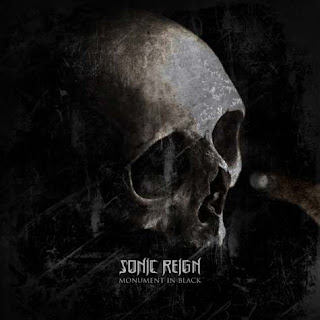 I was not familiar with Sonic Reign before being sent the promo for it. I happened to be out of town for a couple of days so I decided to put it on my Ipod and give it a few spins while I was away. There were some breaks in there but I think I am now ready to talk about this album.
This is totally going to give away the punchline for this review but I'm someone who is not a huge fan of Satyricon, which was something that ultimately impacted my enjoyment of this record. I have not heard Sonic Reign's first full-length, Raw Dark Pure, so I can't say how much of an evolution this album is from that one, but this album takes a lot of cues from Satyricon's "breakthrough(?)" to the mainstream album Now, Diabolical. What you get on this record is black metal being done in a very rock'n'roll-esque fashion, meaning you get straightforward song structures which attempt to be as catchy and accessible (the latter comment I'm willing to be called out for) as possible within the confines of black metal, and clear production. You still have the aggressive guitar playing and drumming along with the wretched vocals, but if you came into this expecting more Darkthrone (early Darkthrone) than Satyricon, you may be disappointed. Now, to be clear, I have no problem with this black'n'roll style or Satyricon or Sonic Reign. I think the style itself can produce some quite good songs and I think both bands can deliver on that front at times, but I have the same problem with this record that I did with the aforementioned Satyricon album above, and that is that the songs are just too extended. When you're writing a song which is pretty much just verse-chorus-verse-chorus-bridge-chorus, it doesn't need to be five-plus minutes long.
But as I said, this band can write solid songs, and riffs that are quite well done as well. Damn near every track on here has at least one solid riff in it and while not every song is a winner, it's better than many other bands do. Tracks like Clouds Above The Desert and A Doctrine Unreachable are prime examples of this, with the former reaching a state of headbanging glory during it's second half and the latter track being some killer instrumental sections that were bogged down by more simplistic chugging parts during the verses (though the background effects on the latter track certainly keep things interesting for its running time). Daily Nightmare Injected is a song I actually have no problem with, along with my track picks below, simply because it's a out and out anthem of a track that I'm sure will be great performed live. Then you have a song like the title-track which, in my honest opinion, does absolutely nothing for the album. It's eight minutes long and really goes nowhere. Now, it's certainly entertaining while it's on, but it really does nothing worthy of that eight minute length. But really, you'll be able to figure out what tracks you like and want to return to and or keep after your first listen. That's not a knock to the album, but this isn't much of a grower. You get most things up front, with the exceptions being some background effects and guitar work, but chances are that you won't find yourself returning to a track because you missed that one guitar line in the background, it'll be because of a catchy lead guitar part or a vocal rhythm.
So in the end this isn't a bad album, but it certainly has its flaws, at least in my opinion. After my first listen I kind of figured out what I was going to say about this album. If you're a fan of more straightforward and song based black metal, give this one a shot, you'll at least get a couple of solid songs out of it.
Overall Score: 7
Highlights: The Whisper In The Dark, Soul Flagellation
Posted by maskofgojira at 3:22 PM