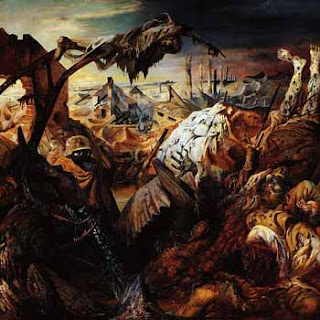 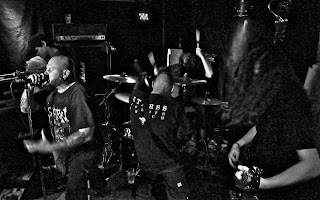 I was rather impressed with Eibon's first full-length album Entering Darkness back in 2010. Since then I haven't really kept tabs on the band too much, but I did remember them when I saw this album. Obviously I thought the cover was pretty cool, so I took the opportunity to finally review this.
It has to be said from the offset that this album definitely takes the sound the band had established on their debut and really makes strips away the fat of most other genres gave the debut full-length. This new album sees them take most of that away and simplify things to the palette of doom and sludge metal. By doing that however, they've managed to write two tracks that both top the eighteen minute mark. These tracks, despite actually making use of some pretty badass riffs, like to stay within the realms of slow, droning chords. Coming from someone who has enjoyed quite a bit of funeral doom from time to time, I don't have a problem with extended and/or drawn-out chord sequences, but rarely have I encountered a band who could make time pass by as quickly as this one did by doing that. Granted, they don't stick to that for an entire song, but there's an entire section in The Void Settlers where that's done before each instrument begins to go off on its own tangent and it just captivated me. Rarely has a doom/sludge metal track of this length passed the time so quickly for me. The band manage to shift speeds and tempos without even coming off as an attempt to even cross pollinate into another genre, which is weird to me. They increase in speed and intensity, but it never comes off as a death metal, hardcore, black metal, etc. part but more like an actual sludge metal part. It's intense and grinding, and that is something that has been lost in the sludge genre in recent years, or at least from what I've seen of it anyway.
Elements of Doom returns to a more dissonant black metal style that was toyed with on the last full-length. With it's twenty-three minute length, it has plenty of room to draw itself out, but actually keeps things engaging for the better part of it's running time. With nice and bright distorted chords being set against the lower and drawn-out doom parts, something that was used on the previous track as well, there becomes this crystal clear sense of dynamic songwriting. The band doesn't jump into calmer or softer sections but instead just knows how to moderate their intensity instead of pounding away in the doom world for an entire song or blasting in with the black metal one. The fact that they remain distorted and heavy for the majority of the record, if not the whole damn thing, and still manage to make these epic songs interesting and dynamically involving is impressive. While I could have done without the extended intro and outro to this track, which equals out to about six or seven minutes when put together, everything in between is damn good stuff.
So yeah, overall this was a pretty killer piece of doom/sludge metal. I'll be hardpressed to find another album in the sludge world, maybe even the doom one, that manages to top this one in shear quality. Definitely check this out if you're a fan of heavy, dynamic, and aggressive, but still slower, forms of metal, it's one of the best things I've heard come out from those genres so far this year.
Overall Score: 8.5
Highlights: The Void Settlers
Posted by maskofgojira at 6:56 AM