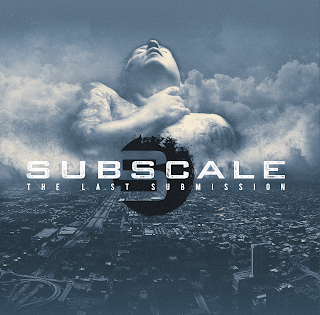 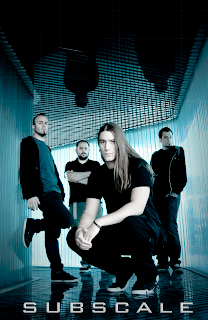 Like most things, I was unaware of Subscale until they sent me their album. I was a little trepidatious at first just because this was an album that was not in the style that I usually am sent. I had some free time recently and decided to give it a listen and wound up thinking it was actually worth covering so here it is.
When I finally looked this band up I was a little surprised that they were listed on several djent based sites and were listed as a djent group. I guess I can understand that, but to me, when I listened to this album it sounded more like a modern sounding industrial metal record than a whole lot of what I've heard from djent. Yes, it's very groove based, but the overall tone of the record feels a lot more sterilized and polished, in addition to all the electronic effects used on here, it doesn't feel like it relies on the low-end chugging as much as some groups and it doesn't try to go for the more progressive and/or technical end of the spectrum either. It reminded me more of Fear Factory than Meshuggah to be honest, whether that makes or breaks the album for you I'm not sure, but it was a bit different than what I had anticipated. It does have to be said that the band did at least make an attempt to make this an album listen (which I find quite impressive for a young group to do). The majority of the album flows like a continuous track without almost no gaps and it's quite impressive to hear that they put that much thought into the flow of the album.
What I will say is that since this is really the band's debut full-length (they put out an EP which somehow still managed to have remixes on it despite being their first release) there are some problems. I'm not sure in what order these songs were written, but it is obvious that some songs are trying to go for that djenty and -core sound, those songs really did not interest me. Maybe fans of that style will think they're awesome, but they did nothing for me, Antecedent or Outreach being prime examples. The band throw in some nice guitar parts in that track, but it doesn't save the track from an ultimately overly stylized attempt at deathcore. I also did not care for the lower growls on this track (among others) on the album either, simply because they recalled more of a deathcore sound rather than a death metal one. Thankfully the vocals on here are actually more varied than I think I would have given the band credit for on first listen, so it's not as if the entire album was dominated by one or two vocal styles. The other problem I have with this album is simply that some songs did not live up to others. Some tracks on here are quite impressive while others just fall into the category I mentioned above. I'd say the band is at their best when they are actually going for some more progressive ideas, the one-two-three punch of Method and Manner, Pull The Threads (Extraction), and Realization is definitely a combination of tracks that really got my attention when I first heard them. Whether it's simply a use of stronger dynamics or stronger songwriting I don't know, but those are two tracks that stood out to me even on my first listen through the album. The last of those three tracks in particular takes a much more melodic turn, for the better in my opinion, and utilizes some of the strongest atmospheric backdrops and vocals on the entire album fittingly.
So yeah, while the album does have it's lackluster moments, there are actually some spots that go well above what I expected them to do. It's definitely a modern metal record in every sense of the word and I know that will appeal to at least some people. So if you dig industrial metal, groove or djent based metal, and maybe even some more progressively tinged metal (without actually crossing over) than this is definitely worth your time.
Overall Score: 7.5
Highlights: Method and Manner, Pull The Threads (Extraction), Realization
Posted by maskofgojira at 9:54 AM