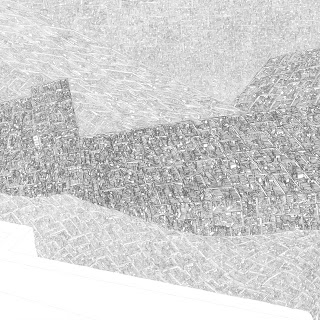 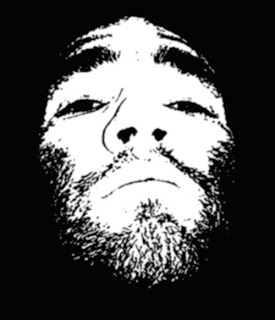 Julien Louvet's project The Austrasian Goat has been one of the most consistently interesting projects to emerge from the funeral doom genre in recent years. With each new release expanding his own sonic universe and playing around with various genres all the while never alienating his audience. This new album popped up on Bandcamp a couple of months back and really threw me for a loop when I first gave it a spin.
Since I have not heard every single piece of material that The Austrasian Goat has released, you'll understand if you look at all the splits that the project has been a part of, I can't say with certainty that this is Louvet's first exploration into the world of neo-folk, but what I can say is that he does a very convincing job of it. As much as I love metal, neo-folk is a style of music that I have developed a great fondness for in recent years and I was extremely surprised when I first put on this record and that was what I heard. The previous black metal and funeral doom outings that this project has released have all been rather well done and have earned the project some well deserved praise from those who listen, but just because you're good at playing fast or playing really slow doesn't mean that you know how to write good songs or even write songs on acoustic instruments. Personally, I've always found The Austrasian Goat's more metal outings to be more intriguing than engaging, they keep me interested, but I can't say that I've ever found them to be particularly memorable once an album ends. This, on the other hand, was quite the little gem.
These songs recall that really genuine sense of melancholy that the project's most powerful doom metal pieces conveyed but without all the distortion. It's somber and very morose, in some ways almost heartbreakingly so, but it's kept at a level which is very accessible to anyone who's already a fan of the genre. Whether it happens to be the very pensive and hypnotic Nizkor or the more minimal melancholy of Curtain or the spacey and ambient Reality Is A Miserable Dream, I was really impressed with Louvet's handling of the genre. The twelve songs that make up this record all maintain that same dour atmosphere and mood, but each track brings with it a slightly different array of ideas. Along with that, and I guess this is to be expect in the genre, but there is also an array of instruments used on here, from the standard acoustic guitar and piano to what sounds like glass jugs and timpani. Obviously that's not all of them and there's a plethora of various synths used on here as well, but it's just so refreshing to hear someone take on board unconventional instruments and make them more than just another sound in a song.
I think that this is a really well developed piece of work that really is something special. In a world where so many metal and rock artists think trying out acoustic music (folk in this case) is easy to do, this album shows just how powerful and well crafted it should be done and sets a new bar in quality for these sorts of albums from metal artists. Definitely check this album out if you're a fan of neo-folk or just pensive and melancholic music in general.
Overall Score: 8.5
Highlights: Ban The Hours, Broken Yad, Reality Is A Miserable Dream
Posted by maskofgojira at 7:03 PM