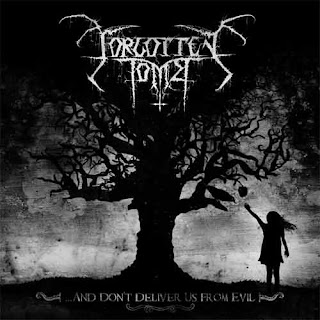 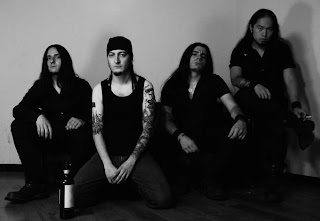 Ever since I first heard of Forgotten Tomb several years ago, I have been waiting for them to reach the same heights as the album I first found them on, Negative Megalomania. After last year's rather unremarkable Under Saturn Retrograde album I didn't expect the band to be releasing more material so soon (though based on their early track-record I shouldn't have been all that surprised). I was rather trepidations coming into this though.
Before Under Saturn Retrograde, I probably would have told you that Forgotten Tomb were on an inclined slope because each album they released only got better. While I can't say that their last full-length was a bad album, it was in no way their best work and felt like a less personal effort, with the band drifting a little too far into their punk and rock'n'roll influences for my tastes. The cover of The Stooges on that album and the G.G. Allen covers on the split with Whiskey Ritual didn't do them any favors either, though, again, they weren't bad, just rather tiresome in my opinion. So when I heard that this album was going to be Herr Morbid's most personal album since 2003's Springtime Depression, I was rather curious to hear what sort of sound that would entail. Was it going to be even further down the sort of black'n'roll road they appeared to be travelling down in their recent releases, or back to a more doomy and atmospheric black metal one from their earlier albums? Surprisingly, it is actually somewhere in between.
This album is definitely more engaging than their last album, the songs are more fluid and feel more powerful. They've maintained that sort of drunken rock'n'roll kind of vibe, but the songs are a lot darker and make use of more dissonant riffs. It also brings back a lot more of that doomy atmosphere from earlier albums, though it never quite returns to the slower doom tempos that those releases made use of all too often - listen to Cold Summer for an instance of that doomy side in full effect. To be perfectly honest, I did have some high hopes for this album, they weren't huge or unreasonable, but I did want this album to be good and, unfortunately, it did not meet those expectations. Make no mistake, this is not a bad album, and I enjoyed this more and think it has more replay value than their last full-length, but it still isn't quite up to the heights that they set themselves up on with early albums. The songs just come across to me a bit too much like the rock'n'roll sort that plagued the last album where I think the band were at their best writing more depressive and melancholic pieces - but that's just me. I'm not going to pretend that that rock tendency doesn't work at times, a track like Let's Torture Each Other is definitely well done, but more often than not, it just made for some rather ill maneuvered shifts in tone that did not sit well with me at all. Adrift is really where the band are at their best, melding morose melodies with big choruses and riffs that jump between black and doom metal.
It's a solid album, not great, but a step into the right direction. I think that there will be many other people who will enjoy this more than I have, that tonal shift is one that I just have trouble getting over. Anyway, if you like progressive black metal or even black metal that has a bit of that punk rock kind of attitude, you should dig this.
Overall Score: 8
Highlights: Cold Summer, Love Me Like You'd Love The Death, Adrift
Posted by maskofgojira at 8:17 PM