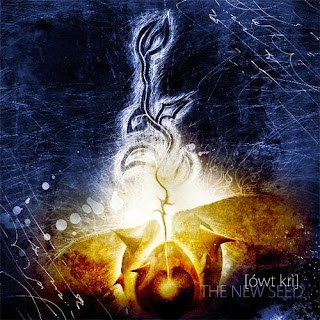 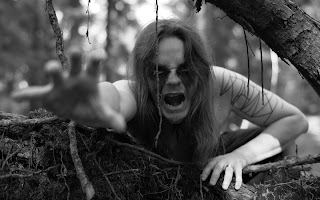 I was not extremely keen on Kenneth K.'s last release as [ówt krì]. Despite an alright review he decided to give me another shot by telling me about this new album of his and I was eager to hear if I would enjoy this one more. In addition to that, I just really dug the cover of this album as well.
I've never been all that keen on the whole ambient and industrial fusion genres, which may explain why I didn't particularly care for [ówt krì]'s (no)DOOM album last year. Whether if just by accident or if on purpose, the industrial tones have been softened on this new album in favor of more droning pieces of ambiance - which is much more my speed. There is also almost no metal influences coming in through these ten tracks as well, which removes that sort of Sunn 0))) quality about the aforementioned album above that I did find somewhat endearing about it. But just because the endearment that I felt towards that album was removed does not mean I feel nothing towards this album, quite the opposite in fact. This album really hit me (softly) with just how directly ambient it is. Yes, there are definitely traces of the more industrial edge from previous releases from this project, but I really enjoyed the ambient approach delivered on here.
While not perfect, the ideas that are expressed on this full-length, I think, are far superior to that of the other recordings I've heard from Kenneth thus far. The somber tones that open the album on Deep South give way to a more orchestral touch on the title-track and then into the spoken word/kind-of-rapped vocals that course over the feedback on On Hostile Ground. Three different sort of ideas that, while the last doesn't really work for me, certainly show a nice perspective on experimentation. In general, I tended to prefer the more strict ambient pieces to the ones with vocals on them, but that's just me. The Patton-esque vocal squawks on Abandoned Path were slightly intriguing though. It is perhaps the albums greatest weakness that the balance between the two sides, the ambient and more more industrial vocal lead pieces, don't coexist side-by-side in a more harmonious fashion. As independent tracks I can take the ones I like and just skip over the ones I don't particularly care for, but as an entire album, it did feel to me that I was listening to two separate albums, or two EPs that were just joined down the middle. Whether the two sides were joined in actual tracks or through just through a more cohesive sounding record, I'm not sure which would work, but either might lead to a record that works better as a whole. The best example of both sides coming together would be on Darker Sensation, in which the spoken word-ish vocals are done on top of a more ambient backdrop, and it actually works.
Overall, this was a solid enough record, definitely an improvement over the last recording I heard from this project, but improvements can still be made. There's just something about those more industrial parts that I don't really dig. I'm not sure this will provide fans of ambient or drone or industrial music anything they haven't heard before, but it's nicely done.
Overall Score: 7.5
Highlights: The New Seed, Dance In Silence, Darker Sensation
Posted by maskofgojira at 7:43 PM