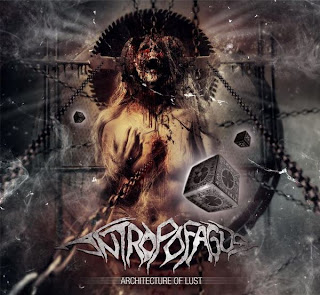 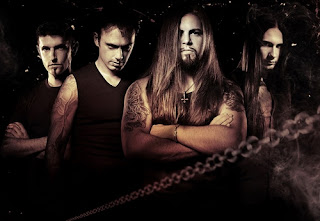 I've said multiple times in the past, and I'll mention it here as well as probably a couple more times when I cover these sorts of albums, that I'm not a huge brutal/slam death fan. There's just sometimes about the simplicity, in some cases, and lack of any real dynamics that really just does absolutely nothing for me when it comes to those sub-genres. But once in a while I'll come across a band that looks interesting enough to peak my interest and I'll wind up giving the album a chance despite my preconceived notions.
When it comes to the whole "brutal" death metal genre, along with slam, probably the thing that turns me off the most are the vocals. I can get behind them in some cases, but a lot of it just sounds like someone pitch-shifting their growls, gurgles, etc. down and even when I know that's not the case the vocals just don't appeal to me. Don't get me wrong though, I love a good guttural growl or toilet bowl gurgle, but I've heard so many bands do vocals that I just find intolerable. Because I like to check out what I'm getting myself into before I check out a lot of bands I've never heard of before, I naturally looked up this band and found their vocals to not only be tolerable, but I actually thought they were enjoyable. They weren't overly guttural but were still quite low and powerful sounding, reminding me more of a death growl than any sort of inhuman sound-effect.
Much like the film of, relatively, the same name, Antropophagus: The Beast, this band pump out non-stop brutality. Though I wouldn't say that this album is as uncontrolled and cringe-inducing as the film, the band still do an adequate job at keeping up the intensity. Musically, the band certainly bring the whole brutal aspect of death metal, but also have a solid amount of technicality within their songs as well. While the band never crosses over into Origin territory in terms of technicality, there is quite an abundance in guitar sweeping and other stuff guitar nerds will freak out all over this record, hear Demise of The Carnal Principle. Granted, those moments are interspersed with your more standard slow breakdowns (think more traditional death metal over deathcore) that I found a bit more enjoyable. Also, when the band do channel a more straightforward, I guess you could say more brutal than technical if you wanted to here, song, I found that they were able to pump out more pummeling and memorable riffs, Exposition of Deformities for example. To be honest, this album is pretty straightforward in terms of its intentions, with the closer, Det Helgerån Av Häxor, being the only real point where more dynamics are demonstrated. This is the track where the band use a more sluggish sense of intensity as oppose to throttling you over and over with blinding technicality or hammering brutality, I'd much rather hearing death metal bands make use of slower tempos anyway, it usually makes for a more memorable song.
It's better than I expected it to be, but in the end it is still an album that's going to get fans of the more "extreme" side of death metal (if you want to call it that) excited more than a traditionalist like me. I certainly prefer this band over many other groups that I've seen put in the same league and genre as these guys. If you're into that more underground death metal, I don't see any reason why you wouldn't find something on here to like.
Overall Score: 8
Highlights: The Lament Configuration, Sadistic Illusive Puritanism, Det Helgerån Av Häxor
Posted by maskofgojira at 10:15 PM