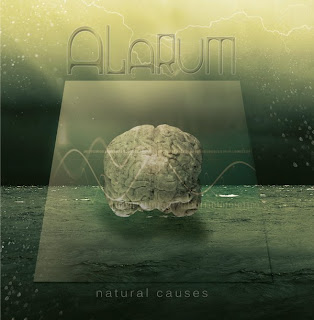 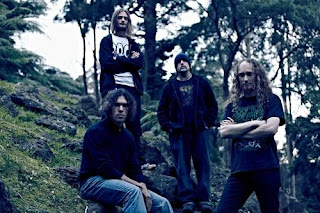 Back when I was huge into the technical death metal genre a couple of years ago, this album was near the top of my most anticipated releases. Years later, my interest has waned and the album never came, and then finally, this year, the album finally got a release date. While I'm nowhere near the fan I was a couple of years ago, I was most definitely going to check it out.
In the grand scheme of things, one could say that Alarum never really was a death metal band as much as they were influenced by the early prog/tech-death bands like Atheist, Cynic, and Pestilence. On here, it's more apparent than ever before that their death metal influences are limited at most. This is a prog/tech metal album, but with more of a thrash approach rather than a death metal one. Personally, I don't think long-time fans of the band will mind as much as a newer fan who might have just found out about them, like I did when I was going through my tech-death phase, might. The lack of brutality and growling might throw some for a loop, but if you've listened to them for a while, I don't think you'll see this album as too much of a shocker.
While the whole tech-death scene has definitely experienced quite a resurgence in recent years with a bunch of bands taking similar influences and mixing them with other sounds to various results, what Alarum are doing is perhaps, sonically more similar to early Atheist, their path seems to follow more closely to Cynic. In my opinion, like I said above this is the farthest away from death metal the band has gone yet, it is also the closest to pure prog-metal and fusion than ever as well. There's less heaviness in the guitar playing, trading in brute force and aggressive parts for more fluidity and jazzy sections which might turn a few fans off, hear For New Creation. An influence from Spanish and flamenco music is a lot more present on here than I remember the band making use of in the past, which is a good thing, as the nice classical guitar bits and more tribal percussion playing in songs like Non-Linear Parallels or Interface totally make the tracks. The performances are also quite well done, with narry a track going by without my really enjoying how none of these songs really tread over into senseless masturbation. These are short songs, and it shows that the band really tried to write some very compact and interesting songs while making them accessible, even when instrumental. That's not to say the band have lot their edge because the thrash element is still very much present in the speed at which most of these songs are played at and the more aggressive vocal snarls.
For what it is, I enjoyed the album; I mean it's not overly mind blowing or anything, but it's solid tech-metal. I feel that if you're open to or already enjoy more progressive metal or fusion, than it's likely that you'll enjoy this release. Check it out if you're into the more "progressive" sort of metal that has a bit more aggression than your average DT rip-off.
Overall Score: 8
Highlights: Shifting Skies Like Nothing, Interface, Sensory Endeavor
Posted by maskofgojira at 10:12 AM