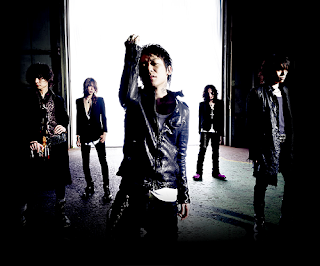 It was only a few years ago that I was more obsessed with anime and manga than music, really. I can still remember being really into those shows with Japanese artists being the opening theme song for a show and just really being into the Japanese music, before I was really an avid music listener. From that time, very few artists and bands have stayed with me, but Dir En Grey has always been my personal favorite.
Though hailing from Japan, they do have their own style of playing, not as avant-garde as Sigh, but not as cheesy as X Japan, just to name off some more well known groups, in a sense, this is the Faith No More of Japan. You'll find that a lot of the band's work is very eccentric and eclectic, with sounds that range from the usual J-pop to death metal. It's only been within the last hand full of releases that the band have really begun to embrace their more metallic influences though, with the last couple bringing in influences from the likes of thrash, groove, nu, and death metal, but obviously mixing them in with their own sound. Thus, in my opinion, this formula was perfected on 2008's "Uroboros," where they not only utilized all those styles, but made it into a very progressive sound.
You'll find that with this new album, the sounds are a lot darker, heavier, and the use of growling, screaming, and guttural vocals is a lot more prominent than perhaps ever before. Songs like Different Sense and Decayed Crow are some of the most intense, vocally, songs that Kyo has ever performed. I don't want to make you think that Kyo's usual melodic, still eccentric, style of singing is vacant on here, because it's still in the majority. This album, from a more musical perspective, sees the return of guitar solos to the band's sound. The band have also brought the bass up a bit higher in the mix on here, with a lot of the nice slapping and finger-picking standing out, hear Amon for example. Some of the band's best guitar and drum work can actually be found on tracks like Juuyoku or Lotus which demonstrate the band retaining their unique sense of melody but mixing it with some more mathy, or technical, sections as well. I think it's important to mention that while the band have never made short albums, this one included, all of their albums a consistently impressive and never boring, with this album topping sixty minutes with fourteen songs. For some reason, even when you have genre blending together that, honestly, have no right to be doing so, these guys pull it off not only by making it sound good, but actually making it a good song; however, this album is not as experimental or genre-bending as they can be, this is a much more focused effort.
By the end of this album, I found myself very satisfied with this new album, though I think it didn't live up to "Uroboros" in my opinion. There really weren't any tracks on here worth skipping, though a few were only above decent, over 75% of this was very good. Definitely check this band, and album, out if you want to hear some experimental metal.
Overall Score: 9
Highlights: "Yokusou Ni Dreambox" Aruiwa Seijuku No Rinen to Tsumetai Ame, Diabolos, Vanitas
Posted by maskofgojira at 7:46 AM