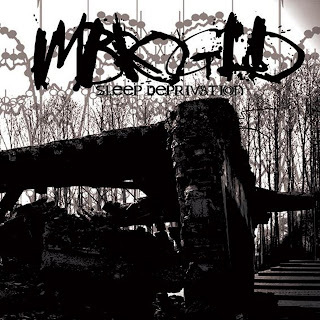 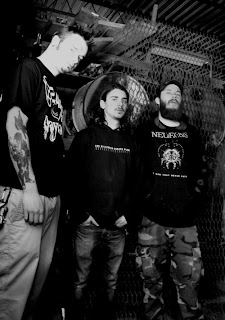 I like to think I have a decent ear for good sounding grind and sludge metal, though I'm sure many would disagree, in my head I think that I've made some good choices with what bands I actually have on my music player. Imbroglio is a band I recently discovered and checked out due to their combination of the two genres, which is something I've always enjoyed. If it's crusty and has variety, chances are I'll at least listen to it.
The band's sound owes a lot to groups like Converge, Botch, Neurosis, Napalm Death, and other bands of that ilk as the sounds of all of them come through on here. Despite being rooted within sludge metal for most part, there's also a quite a spastic streak to these songs as well, hear Mechanical Vulture, where the band just go off the handle and break into dissonant and chaotic riffing. Even when there's a more melodic part there's always just something a bit more dissonant than usual, compared to other groups, which stood out, hear Dead Rain. The longer songs on this record actually come through as somewhat of a more volatile sort of vibe, the post-rock sounding Cellar Door or the dirge of a title-track, Sleep Deprivation, come out as some of the most powerful pieces on the album because these tracks are a bit longer and develop into more weighty pieces.
Something I've always loved about both grind and sludge is the punk kind of vibe I get from them, and this album totally has that spirit of not giving a fuck and just playing whatever they want. There's a genuine sense of anger on here as well that really comes through in the passion with which these songs are being played, just hear tracks like Black Sheep or Scum On Bones. The flow from part to part on here, within each song I mean, just feels very natural not forced, with slow and sludgy parts coming in between chaotic riffing. But when the heavy, doomy parts come down, they groove and sound so dirty and filthy I'm sure anyone that loves sludge would find it hard to resist.
Overall, I thought this was a pretty solid album, not great, but really good. I'd say the worst thing was maybe the lack of anything memorable or truly catchy, there are some, but I would have liked to have found more. If you like filthy, dirty, and grimy sludgecore definitely check this out.
Overall Score: 7.5
Highlights: Cement Shoes, Black Sheep, Sleep Deprivation
Posted by maskofgojira at 9:12 AM